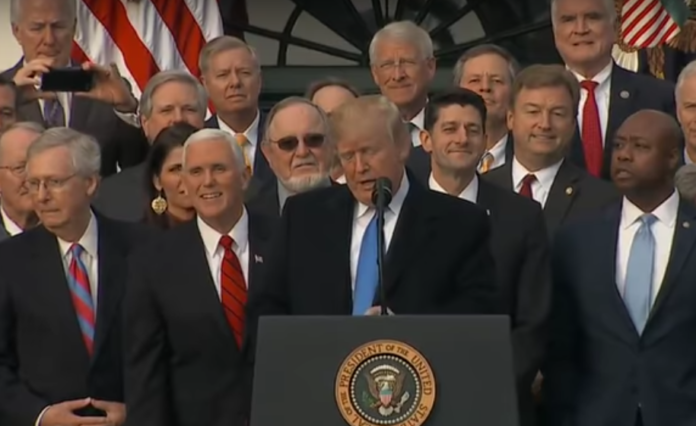 As Republicans prepare for the 2020 Election, a Washington Post columnist warned them on Friday that they better prepare for a bloodbath because their scam tax law has turned millions of Americans against them.

In December 2017, President Donald Trump made a show of signing new tax cuts into law complete with a large group of Republicans behind him shaking hands, laughing, giving thumbs up and smiling giddily like school girls thinking they just did something that all Americans will get behind.

Trump and the GOP repeatedly promised that the bill would bring Americans more money in their paychecks and deliver a modest tax cut even as the wealthiest Americans and corporations received massive tax cuts, resulting in a skyrocketing deficit and national debt.

The corporate tax rate was slashed from 35 percent to 21 percent. Top individual rates went down from 39.6 percent to 37 percent. And the wealthy also received massive estate and gift tax exemptions while most Americans merely received a little extra money in a couple paychecks.

Well, it wasn’t working then and it sure as hell isn’t working now as refunds are down $5 billion and many Trump supporters are figuring out that they got screwed.

Helaine Olen wrote an op-ed for the Washington Post on Friday explaining to Republicans why they should fear their constituents in the next election that is a year and a half away:

“Tax refunds are down more than $5 billion from this time last year, according to an analysis performed by Investor’s Business Daily,” Olen wrote. “Republicans assumed Americans would become converts when they saw they were getting a slightly bigger paycheck, after withholding tables were recalculated in early 2018. They assumed wrong.”

“As millions of Americans grapple with their smaller-than-expected refunds, they are hearing more and more about the big winner of the tax-reform scam: corporate America,” she continued. “Amazon owed zero corporate income tax last year, and as Axios reported earlier this week, General Motors, which made $11.8 billion in profit last year, filed for a refund of slightly more than $100 million.”

Amazon is a $1 trillion company and CEO Jeff Bezos is worth over $100 billion yet the corporate giant did not have to pay a single penny to the federal government and General Motors is getting $100 million back even though it has announced massive layoffs.

The fact is that as tax season continues to unfold more and more Americans are finding out that they got shafted by Republicans who promised that trickle-down would work this time.

“There is no argument the Republicans can come up with to get around this reality. It’s not just that getting into arguments with people about human nature is a loser’s game,” Olen concluded. “It’s that the GOP tax scam was always designed to benefit one group and one group only — the richest and wealthiest among us. Little wonder majorities of Americans say they support raising taxes on the highest earners and the wealthiest Americans. They know they’ve been had.”

Indeed, the tax law was one of the most unpopular bills in America when Republicans passed it, with nearly half of American opposing it. And opposition to it has only increased, and contributed to the landslide beatdown Republicans received at the hands of Democrats in 2018 when they took control of the House. The only reason Republicans held the Senate is because it was a weak year for Democratic Senate candidates, many of whom had to play defense in tough red states. It won’t be the same way in 2020. And Trump’s poll numbers continue to be in the toilet.

Sure, his most hardcore supporters will still vote for him, assuming they ignore their tax returns out of blind loyalty. But they won’t be enough to save him or most Republicans from being soundly rejected on Election Day in favor of the Democratic platform that supports raising taxes on corporations and the wealthy. Republicans can call it socialism all they want, they only have themselves to blame.