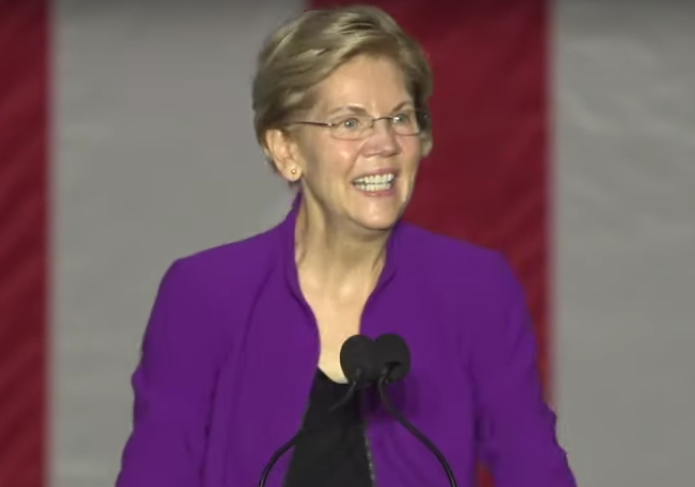 The theme Senator Elizabeth Warren (D-Mass.) focused on during a rally in New York City on Monday was corruption, which she hung around President Donald Trump’s neck as an audience of more than 20,000 cheered.

Warren has surged in popularity in recent weeks as her message increasingly resonates with the American people, who are desperate for sweeping fundamental change that transforms their lives and the nation into something stronger and better for a brighter future for everyone.

Her support of universal healthcare and a Green New Deal to fight climate change have been particular selling points that have propelled her into the top tier of Democratic candidates alongside former Vice-President Joe Biden, whose star is fading, and Senator Bernie Sanders (D-Vt.), who is also vying for the progressive vote.

Under the Washington Square Park arch, the Democratic 2020 presidential candidate once again made her case to be the Democratic nominee who faces Trump in the general election, this time by hammering Trump’s corruption.

“Corruption has put our planet at risk. Corruption has broken our economy. And corruption is breaking our democracy,” Warren said. “Giant corporations have bought off our government.”

Indeed, the fossil fuel industry has Trump in their pocket as he stuffs regulatory agencies full of former oil and gas executives and lobbyists. Trump has also spent much of his presidency pursuing a trade war against China that has devastated farming communities all while he gives tax cuts to the wealthy and enriches himself with decisions benefiting his own businesses.

“Donald Trump is corruption in the flesh,” Warren said. “He is sworn to serve the people of the United States, but he serves only himself and his partners in corruption.”

The most prevalent example of this is the growing scandal of the Air National Guard staying at Trump’s Turnberry resort in Scotland during stopovers to refuel at an airport he has a business arrangement with. The Trump Organization is profiting off taxpayers, who pick up the tab for the military.

Trump’s corruption is so bad in this regard that a federal court recently reinstated the Emoluments lawsuit against him.

Clearly, Trump is corrupt. He promised during the campaign to “drain the swamp,” but all he did was make the swamp deeper and scummier. He is the swamp. And it will take someone like Warren to truly clean it up.