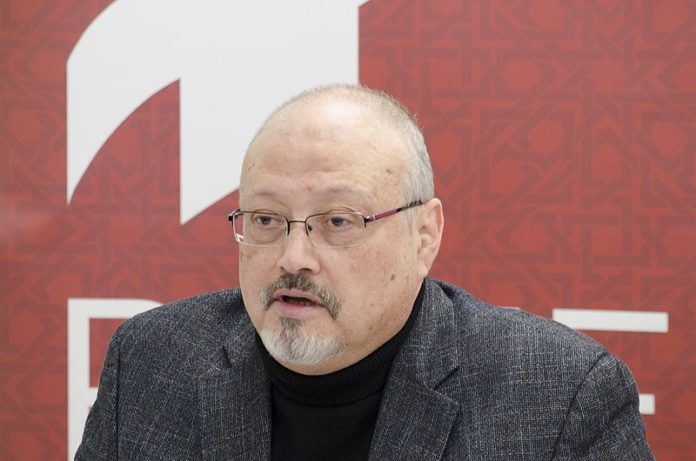 Khashoggi died in October after a Saudi Arabian hit squad allegedly sent by Prince Mohammed bin Salman tortured and murdered him upon his entry of the Saudi Arabian consulate in Istanbul, Turkey. Khashoggi had been a vocal critic of the Saudi war in Yemen.

They then cut his body into pieces and attempted to cover up the ghastly crime, only to be caught by Turkish authorities.

Saudi Arabia has repeatedly denied murdering Khashoggi, and then desperately made several excuses after their denials failed to convince anyone.

Well, no one except President Donald Trump, who has been reluctant to blame the Saudis for their crimes because he doesn’t want to jeopardize arms deals with the kingdom.

As the rest of the world condemns Saudi Arabia, Trump’s administration gave the kingdom a slap on the wrist this week in the form of sanctions against 17 Saudi government workers.

The sanctions don’t do a whole lot to punish Saudi Arabia for this brutal act, especially since Khashoggi is a United States resident whose children are American citizens. It’s also a message that Trump does not care about journalists and how they are treated overseas.

But Washington Post editor Karen Attiah cares. She worked closely with Khashoggi and is understandably upset at the Saudis and the Trump administration for going easy on them.

Attiah took to Twitter on Thursday to explain that the CIA knew about bin Salman’s plot to have her friend and colleague killed and said Trump has blood on his hands:

CIA had intelligence that the the Saudis had a plot to lure and capture #Khashoggi. A plan that went all the way to MBS.

If the Trump administration allows the masterminds behind Jamal’s murder to go free, history will record this as a moral (blood) stain on this presidency.

“The crown prince of Saudi Arabia, Mohammed bin Salman, ordered an operation to lure Washington Post columnist Jamal #Khashoggi back to Saudi Arabia from his home in Virginia and then detain him, according to U.S. intelligence intercepts of Saudi officials discussing the plan.”

For all those who want to claim that the crown prince is innocent of any wrongdoing— CIA intercepted plans from the Crown Prince to lure and kidnap Jamal #Khashoggi from his home in Virgina: https://t.co/JEPtEwrnUf

Again, this is complete bullshit.

And shame on John Bolton for rushing to say that the Crown Prince was not implicated. Virtually impossible that MBS had no knowledge of the plan to kill #khashoggi.

They murdered a US resident, with dual US citizen children, who wrote for a US paper, in a Saudi diplomatic building in Turkey. This is a goddamn international crime and should be investigated as such. https://t.co/xmw4ErzfFT

She then tore into the sanctions:

1) who are these 17 individuals and what is their connection to the murder?

Sick to my stomach all over again. #khashoggi

Sanctions will not fix this. It’s not enough. #justiceforjamal https://t.co/gJND4qyzN5

Attiah is right. Saudi Arabia should not be able to murder a U.S. resident and get away with it. This slap on the wrist will basically give them and other authoritarian nations the green light to murder Americans and journalists with little consequence.

She concluded by asking people to keep fighting for justice:

There will be a lot of temptation to shrug off the #Khashoggi murder as “just middle east politics”. Or to feel like Jamal’s murderers will get away with it.

We mustn’t give in to defeatism and do nothing. If we do, then agents of repression win. They want us to feel this way.

The U.S. governments primary responsibility is to protect the lives of citizens and residents. By merely sanctioning a few Saudi officials instead of seeking true justice, Trump is ignoring that responsibility. Saudi Arabia murdered a man who lived here, a man whose children are Americans. That should mean something. If we aren’t willing to call out our supposed allies for committing capital crimes against our own people for no real reason, it sends a signal to the world that our government is weak. And that puts any American overseas in very serious jeopardy.