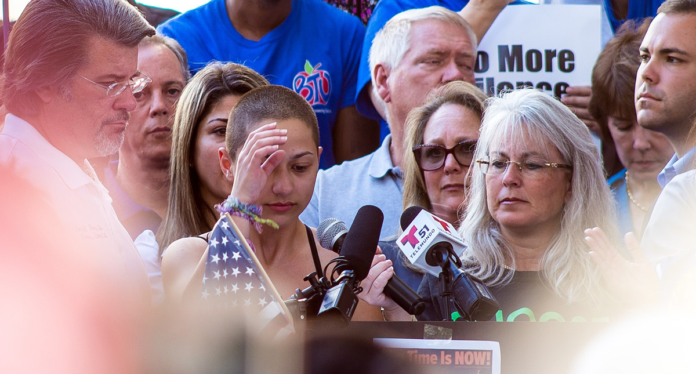 A majority of D.C. Council Members support a measure to lower the age to vote to 16-years-old, following the impressive display of maturity from Parkland, Florida students who organized gun reform marches in the nation’s capital last month called March for Our Lives.

Conservatives have lashed out against the very idea on Twitter, saying it’s “cheating” and that 16-year-olds should wait until 18.

Meanwhile, NRA supporters are saying that if the age to purchase assault rifles is raised, then the voting age should be raised to 21 as well.

NRA supporters are fighting back against the possibility that the legal age to buy an assault rifle may rise to 21?

Do you know why?

On the other side of the spectrum, documentary filmmaker and activist, Michael Moore, and many progressive people believe it’s a good idea:

If there's one thing we've learned since Parkland, it's that the voting age should be lowered to 16. Other countries do it, we should too.

D.C. City Council Member Charles Allen (D) says he was inspired by March for Our Lives, and that those well-informed kids should be able to have a voice at the polls. Allen said:

“At the age of 16, our society already gives young people greater legal responsibility. They can drive a car. They can work. Some are raising a family or helping their family make ends meet. They pay taxes. And yet, they can’t exercise their voice where it matters most — at the ballot box.”

A report from NBC News says that Mayor Muriel Bowser supports lowering the age, as well as most of the 13 D.C. city council members.

Charles Allen introduced a similar bill three years ago, but it failed. Now, because of the work of student activists across the country, it has much stronger momentum. He believes the move will lead to encouraging engagement in democracy.

Momentum continues to build to bring more voices – young voices – to show their power at the ballot box. Plus, there’s this: "Research suggests that voting in high school might actually help lead to greater lifelong civic engagement." https://t.co/U16AJrEaJ5

Although critics say 16 year-olds are immature, citing such incriminating evidence as the “Tide pod challenge,” an absurd dare to consume laundry detergent, the kids from Parkland and elsewhere have proven themselves well-spoken, politically savvy, and aware of key issues.

Meanwhile, Republicans have clearly displayed immaturity, as they enable a President who insults, degrades and bullies people on Twitter on most days.

The District of Columbia is in a unique situation as both a city and pseudo-state, which means they could allow 16 year-olds to vote not just in municipal elections, but also in the 2020 presidential election or any other election, for that matter.

However, before we get too excited, Congress can block the bill the council members passed. Since Republicans are currently in the majority, they would most likely put the kibosh on any move to extend voting rights to younger people.

Republicans know the Parkland students and others want broad gun reform, and that Republicans embody the opposition to that, among a great many other progressive ideals. All the more reason to bide our time and get to the polls whenever we can.