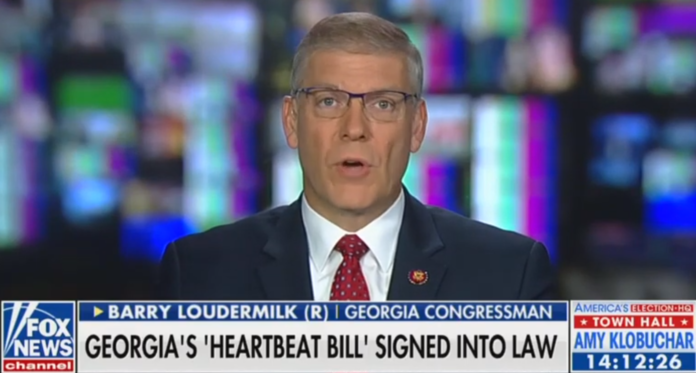 On Tuesday, Georgia Governor Brian Kemp (R) signed a bill which makes nearly all abortions in the state illegal, becoming the latest state to try and control a woman’s right to make her own reproductive decisions without interference.

But according to Georgia state Rep. Barry Loudermilk (R), the fetal heartbeat bill makes perfect sense because if you go to a hospital, they’re going to check your pulse to determine a sign of life.

Yes, he actually said that.

Appearing on Fox News, Loudermilk — who has zero medical training or expertise — had the audacity to remark:

“The critical part of this is, look, the heartbeat has been used in science for many, many, many years as a detection of life,” he explained. “If you are in the hospital, if you’re having issues, they are checking for heartbeat, to see ‘Do you have a heartbeat?’ That’s gonna tell the doctors whether you’re alive or not. These babies that have heartbeats have a complete circulatory system. You can take an image of a child at that stage of life and show it to a young child and they are going to identify that is a baby.”

As ThinkProgress notes, the Georgia law, HB 481, is unconstitutional on its face:

HB 481, prohibits virtually all abortion after the time when a physician can first detect cardiac activity — as early as six weeks’ gestation — long before many people even know they’re pregnant and well before a fetus is actually viable outside the womb, which is usually between 24 and 28 weeks. It also grants embryos and fetuses the same legal rights — including tax deductions — as other “natural persons.”

Pro-choice activists have already signaled that they plan to fight HB 481 in the courts. Elisabeth Smith, chief counsel at the Center for Reproductive Rights, said in a statement:

“Bans like this have always been blocked by courts. We will be suing Georgia to make sure this law has the same fate.”