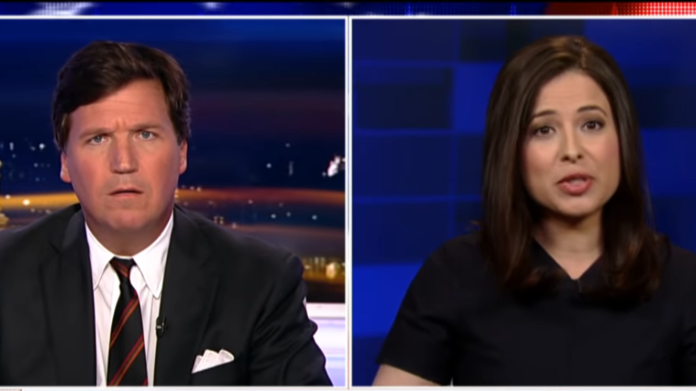 Fox News host Tucker Carlson got more than he bargained for when he debated pro-choice advocate Monica Klein Wednesday evening on his show.

Carlson asked Klein about a bill in Virginia which would expand abortion rights. In response, Klein made it clear she wasn’t about to let the Fox host frame the debate:

“I understand that you want to go back to a time where Roe v. Wade was illegal, where women were having back-alley abortions and they were using coat hangers to have abortions.”

And that was all it took for Klein to give Carlson a much-needed lesson in the issue of reproductive freedom, telling him:

“Have you asked yourself why you spend so much time talking about this rather than thinking about why your party is trying to repeal Roe v. Wade and control women’s bodies. Right now, there are seven states where there’s only one abortion clinic. There are four states with trigger bans where if Roe v. Wade is repealed, women cannot get reproductive healthcare. This is about a woman’s right to choose and you as a man should not have a single say in that.”

When Carlson tried to steer the conversation to late-term abortion, Klein again shut him down:

“Your party is the one tearing families apart at the border and allowing children to die in federal custody. Whose party is harming children?”

Once more, Carlson was left with only a one-word response:

Near the end of the conversation, Carlson desperately tried to excuse Klein by suggesting he had a low opinion of her:

“This is obviously a pointless conversation and I think less of you after it, I have to say.”

Klein was equal to the task, putting the insult right back in Carlson’s face:

“I already think less of you, so don’t worry.”

Republicans always want to talk about the rights of a fetus, but when fetus leaves the mother’s body and becomes a child, they could not possibly care less whether the baby has decent food, shelter, or healthcare. The hypocrisy of the GOP’s position is abundantly clear. Any rational person can see it, but no one ever said right-wingers operate from a position of logic and fact or genuine concern for their fellow man and woman.