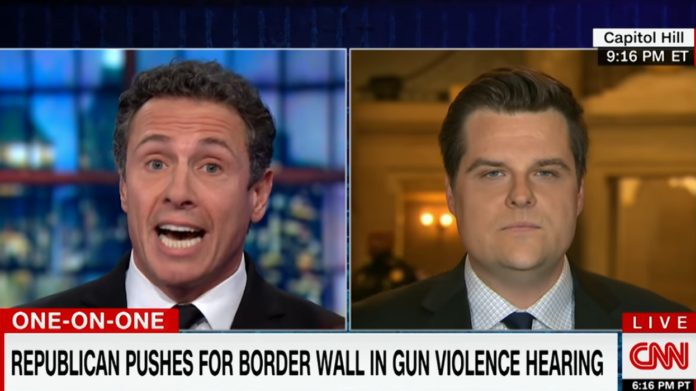 CNN host Chris Cuomo ripped Rep. Matt Gaetz (R-FL) to shreds on his show Thursday evening for his years of inaction on the issue of gun violence and also took the congressman to task for trying to change the subject to the border wall during a congressional hearing on gun control earlier this week.

Cuomo began by telling Gaetz he was wrong to grandstand at the congressional hearing:

“A wall has got no business in the discussion at a hearing about what to do about these mass shootings and crimes that maybe ― maybe ― can be prevented. It looked like grandstanding because it has nothing to with the solution.”

Rather than admit he had overplayed his hand and apologize, Gaetz again brought up the wall:

“I wanted to highlight the fact that there are victims of gun violence that would be in a better position today if we did not have illegal immigrants using guns to kill people. Like they did with Rocky Paul Jones when he was killed.”

But Cuomo wasn’t having any of the congressman’s diversionary tactics, telling him:

“What I’m saying is a wall has got no business in the discussion at a hearing about what to do about these mass shootings and crimes that maybe can be prevented. It looked like grandstanding because it has nothing to do with the solution. The numbers don’t match up and the politics don’t match up.”

When Gaetz continued to mention the border all, Cuomo slammed him:

“You guys have never done a damn thing until it became a tool of opportunity for you to talk about immigration. These mass shootings keep happening and you do nothing except go on TV and say, ‘We’re not a law away.’”

The two sparred for a few more minutes, with Cuomo accusing Gaetz of using immigrants as an “article of convenience” to carry water for Trump and his wall. Taken aback, Gaetz asked:

“You think that we are that craven?”

Cuomo didn’t hesitate for a second: