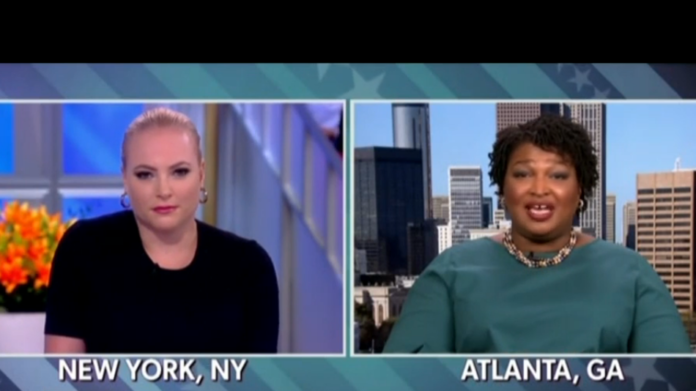 Republicans love to accuse Democrats of being weak on protecting the Second Amendment right to bear arms, but “The View” co-host Meghan McCain found out Tuesday how that strategy can backfire badly in some instances.

Georgia Democratic gubernatorial candidate Stacey Abrams was the guest, and McCain inquired if Abrams would support a ban on AR-15 assault rifles, the same type of weapon used by the shooter at the Pittsburgh synagogue over the weekend. 11 people were killed in that mass shooting. Abrams replied:

“I’m not anti-gun. My great-grandmother taught me how to shoot when I was growing up in Mississippi. I don’t hunt because I mostly eat chicken and that seems mean. Most responsible gun owners understand that they have the responsibility for the firearms, and making sure that only responsible people have those firearms.”

Abrams also noted that she does indeed support waiting periods for buying a weapon and would back a ban on assault weapons. That led McCain to wonder aloud if Abrams would be in favor of “rounding them up from civilians in Georgia.” Again, Abrams was more than ready for the question, reminding McCain there was a ban on assault weapons in this country in the not-so-distant past:

“We have had a ban on assault weapons before in the United States, and I think that we should do it again.

The Democratic candidate also made sure to tell McCain that one of the most conservative Supreme Court justices in history, Antonin Scalia, agreed that the government does indeed have the right to pass sensible gun laws:

“It is possible to believe in responsible gun ownership and to believe that there should be regulations on that.”

That isn’t possible, however, when you take hundreds of thousands of dollars in campaign donations from the NRA the way so many Republicans do. The GOP is a slave to the gun lobby. They prove it anytime a piece of legislation is so much as brought forward for debate. And that alone proves that one political party in this country has already thrown up their hands and surrendered when it comes to the issue of gun control.