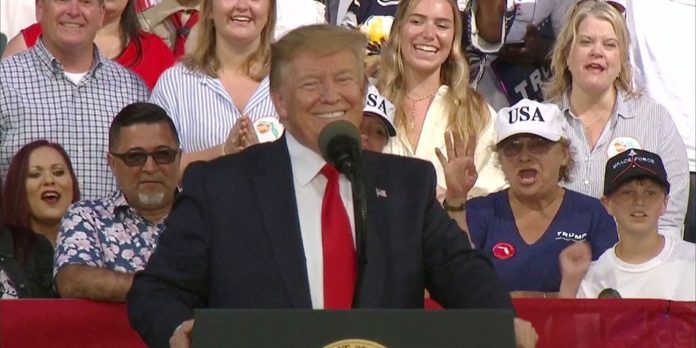 At a rally he held in Panama City Beach, Florida, Wednesday evening, President Donald Trump chuckled and nodded his head when a supporter suggested that immigrants crossing from the southern border be shot.

Trump was in the middle of an extended rant about the recent surge of migrants seeking asylum in the United States (which they have every right to do under U.S. law) and how they’re entitled to a hearing before an immigration judge while only “two or three border security people who are brave” have to deal with “15,000 people marching up.” He then added:

The president then rhetorically asked if there was any way to “stop these people,” which led a person near the stage to shout:

As if savoring the punchline to a joke, Trump smiled broadly and shook his head, finally remarking:

In March, Trump seemed to suggest that shooting immigrants might be a good idea, telling Fox News host Sean Hannity:

“Now we are capturing these people. We are getting them but we don’t do it like other countries. Other countries stand there with machine guns, ready to fire.

There were other disturbing (and downright surreal) moments at Trump’s Wednesday rally in Florida:

As the 2020 election draws closer, you can expect more unhinged comments from this president. He has no platform or accomplishments to run on, so he’ll rely on fear, anger, hatred, and conspiracy theories.