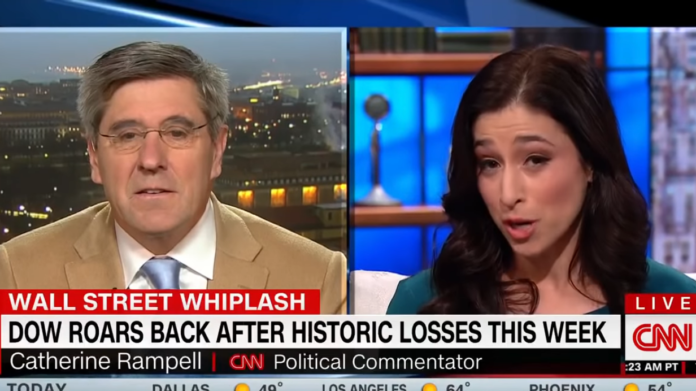 As the U.S. stock market continues to experience wild up and down swings from one day to another, a former Trump campaign economic adviser was cold busted on CNN Friday morning when he tried to make up facts to justify President Donald Trump’s repeated attacks on the Federal Reserve.

Stephen Moore, who currently serves as chief economist for the Heritage Foundation and is an ardent supporter of the president, argued that recent interest rate hikes by the Fed were totally unnecessary and damaged the economy:

“Both of the rate hikes were unnecessary and were a cause for deflation in the economy.”

But Washington Post columnist Catherine Rampell was quick to call Moore out for his lie:

“Wait, wait, wait! There is no deflation! Look at the Consumer Price Index!”

When Moore tried to argue that prices were dropping in the commodities markets, Rampell was again quick to counter Moore, telling him:

“Soy bean prices are falling because of the trade war.”

But it was what Rampell said next that completely shut down Moore. She reminded him that during the Obama administration, he had complained the Fed was keeping interest rates too low, which could lead to hyperinflation:

“I’m old enough to remember when, ten years ago, during an actual deflation, you went on TV on a rival network and said we were about to have hyperinflation and told the Fed that it was irresponsible then to keep rates low. It’s totally inconsistent and it’s totally irresponsible to make up numbers.”

Moore then got defensive:

“I’m not making up numbers.”

The stock market might be able to stabilize if Trump would end his destructive trade and tariff war, keep his mouth shut, and stop tweeting out attacks on the Federal Reserve. But until that happens, it appears the U.S. is headed for a recession in the very near future. And that recession will be Trump’s fault, whether he ever admits it or not.