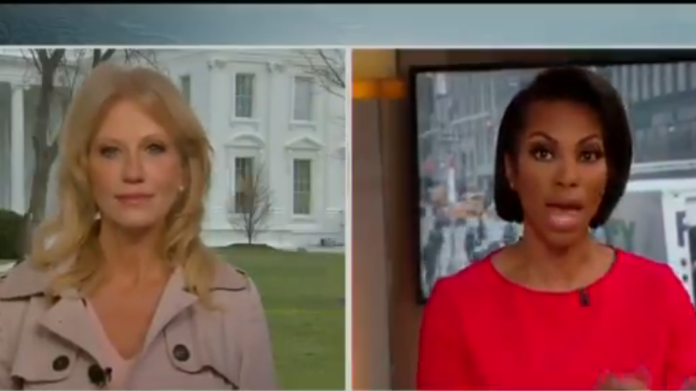 Fox News (aka Trump TV) is almost always willing to eager to provide a platform for anyone from the White House who wants to make an appearance and spout whatever lies come to mind, but on Wednesday afternoon that changed, with one Fox host pushing back on Kellyanne Conway’s attempts to blame Democrats for the ongoing government shutdown.

Harris Faulkner was interviewing Conway, and the senior counselor to the president repeatedly tried to downplay the economic damage being done as a result of the shutdown. That led the Fox host to remind Conway of the federal employees who are suffering as they go without yet another paycheck:

“800,00 people hurting. The president signing legislation that they’ll get back pay — but many of those contractors in the constellation around the government workers will not get that pay. That is traditionally how it works, and they are going without. So this is a broadened swath of people who are damaged as the government is shut down. If the president is given something that both houses of Congress agree on, will he sign it?”

“It depends what it says. He obviously has said that he wants people to be paid. And that they will be paid —”

Faulkner was having none of it, interrupting Conway:

“Yeah, we got that. But will he sign something that doesn’t have border wall funding as we get late, late, late in the game now?”

Minutes later, Faulkner interviewed Senator Rick Scott (R-FL), who whined that Congress “is not working” and members of Congress shouldn’t get paid until the shutdown ends.

The Fox host leveled Scott, too, telling him:

Memo to Donald Trump: If Fox News is sick of your selfish shutdown, you might want to reconsider the value of it.

Conway isn’t happy about it & tells her, “That’s not realistic. I’m sorry. Respectfully.”

It’s unusual for Trump officials to get pushback like this on Fox News! pic.twitter.com/FpkLXu2XEC

Immediately following the Conway interview, Fox News host @HARRISFAULKNER grills @SenRickScott on “if it’s fair to hinge other people’s livelihoods who work for the govt to discussions you guys should be having” and reminds him that Trump said he’d “own the shutdown.” 👀👀👀 pic.twitter.com/wf3EX7LiVd