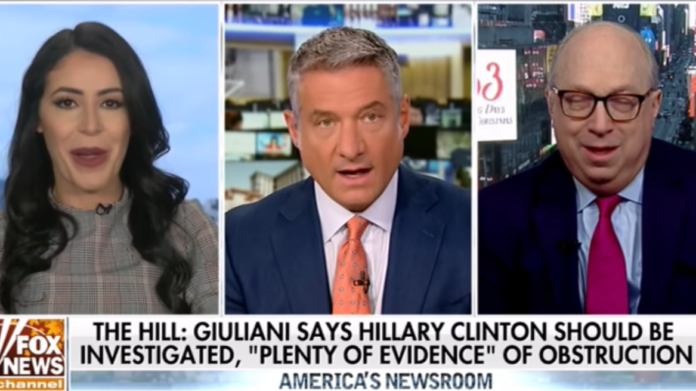 While Fox News usually delights in saying terrible things about former Secretary of State Hillary Clinton, one guest went too far Thursday and wound running a segment off the rails.

The discussion was supposed to be about a report from The Hill in which Rudy Giuliani said Clinton should be investigated for obstruction of justice. That led host Rick Leventhal to ask Anna Paulina, Director of Spanish Outreach for the Super PAC Turning Point USA, about Giuliani’s comments. Instead of responding to that question, Paulina remarked:

“I’d have to say, with everything that happened with President Trump and the border, you know the Dick Act of 1903 established the ability of the president to federalize the National Guard and basically call forth the National Guard in times of crisis…”

Leventhal reminded Paulina that the discussion was about emails, turning to political analyst Doug Schoen. After Schoen commented on the email scandal, Leventhal noted it was amazing that Clinton was still in the headlines. That led Paulina to interject:

A clearly stunned Leventhal could only respond:

“Okay, that is news that we are breaking here. Not appropriate.”

Seconds later, the Fox host looked into the camera and told viewers:

“We are going to wrap this segment a little bit early because of the language that was used in the segment, and we apologize to our viewers for that.”

“We want to reiterate that we do not condone the language that Anna Paulina just displayed here, and we apologize to Secretary Clinton for that. Fox News does not condone her sentiment. It’s Thanksgiving guys, lighten up. Come on!”

Has Fox News suddenly developed a conscience? Of course not! They still allow Sean Hannity and Laura Ingraham to spew their propaganda, lies, and conspiracy theories each and every night on their network.