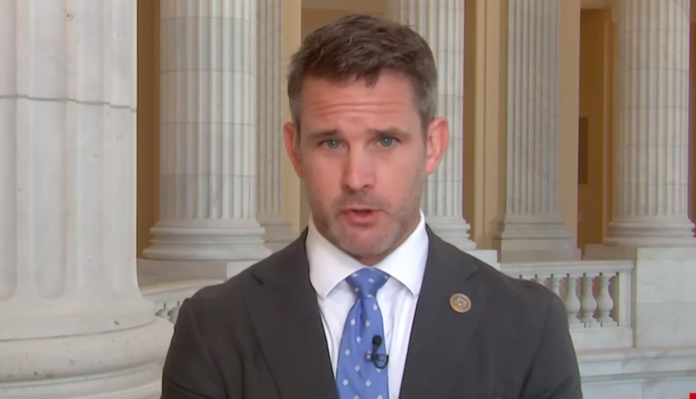 Congressional Republicans are in quite a pickle. On the one hand, they want to pretend they believe in the Constitution and the rule of law, but on the other hand they’re actively engaged on helping President Donald Trump carry out his massive cover up via his refusal to comply with congressional oversight.

Rep. Adam Kinzinger (R-IL) was a guest on MSNBC Tuesday morning, and was asked by host Mika Brzezinski if he agreed with his colleague, Rep. Justin Amash (R-MI), who said over the weekend that President Trump has committed impeachable offenses. Kinzinger responded:

“No, I do disagree with him, because, you know — look, I like Justin personally, like, we get along, but there’s never really been anything out here politically or in policy that we agree on, and this is one of those, too. I read the Mueller report, I think a lot of congressmen, maybe most congressmen have.

“It’s long and there’s a lot of legalese. When I read it, I said, first off, there’s no evidence of collusion. When it comes to the obstruction issue, there’s no final thing mentioned on that, and what it comes down to is, people that were responsible were held responsible.”

Brzezinski then asked if Kinzinger believed Attorney General William Barr had perjured himself during his testimony to the Senate Judiciary Committee. The congressman replied:

“Not that I’ve seen, no. I get that this is — when Mueller came out and said we don’t have evidence to say let’s indict and send the president to jail, it created this kind of storm. A lot of people invested years in this narrative. Now they’re going to do investigation after investigation, and look, they’re in the majority. That’s their opportunity, their option to do it. I just disagree, and when you have most of the Democrats not even saying impeachment again, this idea there’s going to be some shift in the Republican belief I think is unrealistic.”

Associated Press White House correspondent Jonathan Lemire, who was also on the MSNBC panel, then inquired of Kinzinger if he bought the White House argument that Congress cannot investigate the president. That’s when the Illinois Republican fumbled badly:

“I don’t know. Look, I’m not an expert in these questions. I just hear from people what’s going on. I hear a compelling argument about why there should be executive privilege and why when people, for instance, go and testify to a grand jury they should be able to have that information protected and given to Mueller, and it doesn’t have to necessarily come out and be displayed over public. There’s sanctity in the grand jury.”

You’re not an expert, Mr. Kinzinger? Do you have anyone with a law degree on your staff? Most members of congress do, just for times like this, when a legal question arises.

Republicans are wimping out, and their unwillingness to speak truth to power is not only embarrassing, it’s also a threat to the very foundations of this republic.