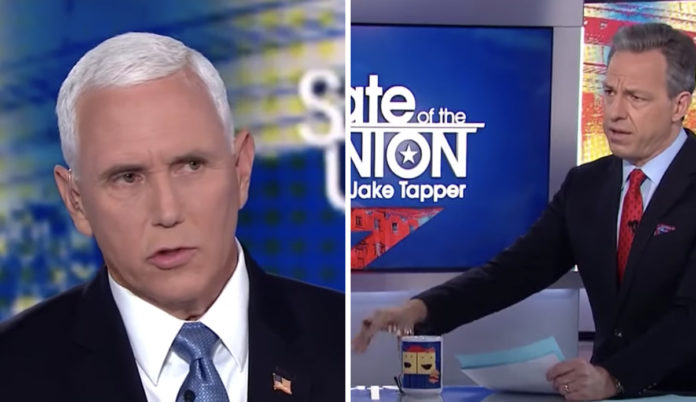 Vice President Mike Pence got put into a precarious position Sunday during an appearance on CNN’s “State of the Union” when host Jake Tapper began to discuss environmental policy and climate change.

“Do you think human-induced climate emergency is a threat to the United States?”

“Well, what I will tell you is that we’ll always follow the science on that in this administration.”

“The science says it is.”

Pence attempted to dodge the question:

“I think the answer to that is going to be based on the science.”

“But the science says yes. I am asking you what you think.

“The science community in your own administration at NOAA, at the DNI, they’ve all said it’s a threat, but you won’t for some reason.”

But it was what Pence said next that made Tapper laugh at him. The vice president proudly declared:

“America has the cleanest air and water in the world. We’ll continue to use market forces….”

“That’s not true. We don’t have the cleanest air and water in the world. We don’t. You get back to me with some statistics that show it.”

All Pence could manage in reply was:

No you aren’t, Mike. Not even close. Like nearly everything that emanates from this administration, that’s just a giant honking like, as National Geographic reported in February:

This regulation revolved around a complicated rule referred to as “once in, always in” or OIAI. Essentially, OIAI said that if a company polluted over the legal limit, they would have to match the lowest levels set by their industry peers and they would have to match them indefinitely. By dropping OIAI, the Trump EPA forces companies to innovate ways to decrease their emissions, but once those lower targets are met, they’re no longer required to keep using those innovations.

President Trump issued an executive order in 2017 ordering the EPA to formally review what waters fell under the jurisdiction of the EPA and Army Corps of Engineers according to the 1972 Clean Water Act. The proposed change narrowed the definition of what’s considered a federally protected river or wetland.

Pence is just as full of hot air as his boss. Isn’t he supposed to be a Christian? Doesn’t he know it’s a sin to lie?