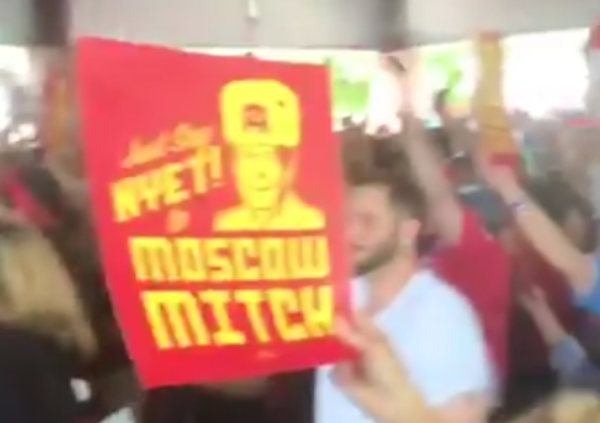 Senate Majority Leader Mitch McConnell (R-Ky.) returned to Kentucky this week to attend a political event, only to be greeted by “Moscow Mitch” chants from the crowd.

Even as McConnell was being introduced to speak, the audience waved Russian flags and repeatedly uttered the chant, making clear their disapproval of McConnell’s decision to block two bills in the Senate that would help protect American elections from being influenced by the Russians.

Ever since, he has been plagued with the “Moscow Mitch” nickname, and even whined about it on the Senate floor and accused Democrats and the media of McCarthyism.

If McConnell were to let both bills come to a vote, it’s predicted they would overwhelmingly pass.

McConnell’s refusal to secure our elections only enables Russia to keep undermining our democracy, and the only reason he is blocking the bills is that Republicans are so desperate to keep power that they are resorting to seeking foreign aid.

Not even Kentuckians can defend that, which is why they drowned him out.

In his first public appearance of the August recess, Mitch McConnell was greeted by loud chants of #MoscowMitch that drowned out his speech. It infuriated him. Buying Say Nyet to #MoscowMitch merch would make him even more mad: https://t.co/4H4YvzArbK pic.twitter.com/F9vX3Rv6LB

Listen as a crowd of Kentuckians drowns out @senatemajldr with chants of “Moscow Mitch” today at Fancy Farm. Cc @KyDems pic.twitter.com/Ds5jSJOl5c

Despite the “Moscow Mitch” chants, McConnell doubled down by again bragging about being the “Grim Reaper” of the Senate and how he blocked President Obama’s Supreme Court pick. He also mocked and insulted his Democratic opponent Amy McGrath by intentionally misstating her name.

Mitch McConnell is far too cocky for a lawmaker who only has a 23 percent favorability rating in his own state.

Clearly, it’s time for his career to come to an end.