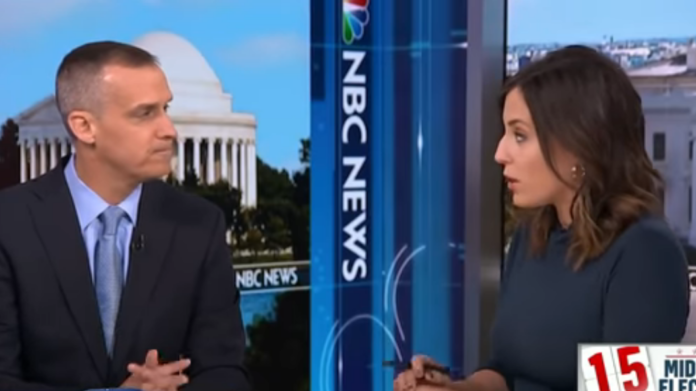 Remember Corey Lewandowski? He was one of Donald Trump’s many campaign managers, and now he has a new book out that he’s trying desperately to sell copies of, so he dropped by MSNBC Monday morning for an interview with Hallie Jackson.

Jackson began by noting that as he barnstorms around the country, President Trump is telling one lie after another, which led her to ask Lewandowski:

“Why hasn’t he told the truth?”

Lewandowski began his futile attempt to defend Trump by referring to the president’s recent promise that he would be passing a middle-class tax cut by November 1 even though Congress is in recess until after the midterm election on November 6, telling Jackson that “there will be an opportunity following the midterm elections to vote on potentially a second portion of that tax cut.”

But Jackson was ready for Lewandowski’s try at moving the goalposts, reminding him:

“But that’s not what the president said. He said by November 1st he would have that tax cut thing going, and that is just one example of some of these other things that the president has said that are simply not backed up by the facts. Why is he doing that, does he think voters don’t care or don’t know?”

And when Jackson then referenced Trump’s latest outburst about the 7,000 immigrants heading to the U.S.-Mexico border from Central America, Lewandowski tried to reply by noting that the border needs to be secured. But again, Jackson hit him with facts:

“That’s different from what the president is saying. We have a series of fact checkers that have said there is no evidence to support the claims that the president is making. So let me go back to that question just one more time. He keeps saying things that aren’t true. Why?”

Unable to respond, Lewandowski decided to do an impression of his former boss and blatantly lie, alleging that some immigrants had been paid to join the caravan. Jackson shut Lewandowski down completely by telling him:

“I’m asking a broader question that, respectfully I haven’t heard a great answer, or any answer from you. Why can’t the president just tell the truth?”

The answer, of course, is simple: Donald Trump can’t tell the truth because he doesn’t have an ounce of truth in him.