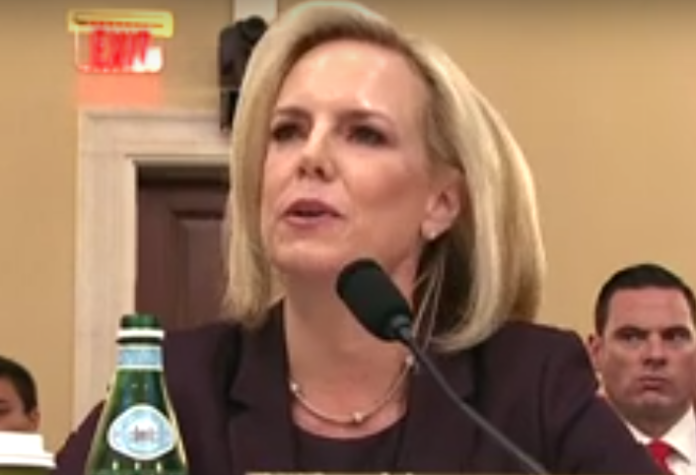 Department of Homeland Security Secretary Kirstjen Nielsen testified during a House Homeland Security hearing on Wednesday and was totally unprepared to answer how many migrant children her agency has detained as Rep. Sheila Jackson Lee (D-Texas) grilled her.

Thousands of children have been kidnapped from their parents and imprisoned in what amounts to internment camps by DHS over the last two years in a crime against humanity that has no end in sight as President Donald Trump justifies the practice by portraying immigrants as an invasion force attacking the southern border.

In the process, some children have died due to Border Patrol carelessness and irresponsibility.

Rather than take responsibility for the kids her agency is separating from migrant parents, Nielsen blamed the parents instead.

And that’s why House Democrats dragged her into a hearing to testify on Wednesday.

During the hearing, Lee asked Nielsen about the number of children that have been detained so far.

“Do you know how many young people are detained?” she asked.

One would have thought that Nielsen would have been prepared to answer this particular question since it’s a very basic question. But she came unprepared.

“I don’t have that number in front of me<” Nielsen claimed. “We have all of the numbers.”

She then promised to get the number to Lee as soon as possible.

Rep. @JacksonLeeTX18: “Do you know how many young people are detained?”@SecNielsen: “Yes, ma’am. I don’t have that number in front of me. We have all of the numbers.

Jackson Lee: “Will you provide that for me?”

Lee also asked Nielsen is she took an oath to the Constitution or to Trump.

“The oath as you know is to the Constitution and the people of the country,” she replied.

DHS Sec. Nielsen: “No ma’am, the oath as you know is to the Constitution and the people of the country.” https://t.co/jQMNiHopcs pic.twitter.com/vH0oe0jACb

Clearly, Nielsen is not obeying the Constitution since she is busy imprisoning children without proper due process and is treating them more like animals or criminals than human beings with rights.

According to NPR, around 15,000 migrant children have been detained in camps and most of the camps have reached capacity or are understaffed. And these children may never see their parents again. That’s not the American Dream, it’s an American nightmare.