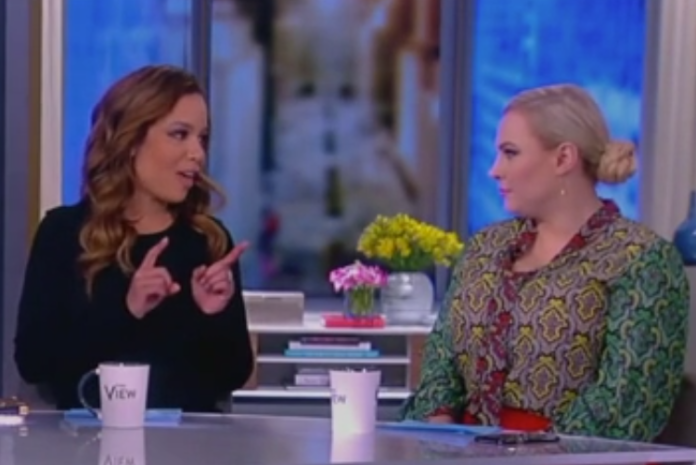 “The View” host Meghan McCain continued to run interference for President Donald Trump on Tuesday by complaining about the scope of investigations by House Democrats before running into a legal buzzsaw by claiming collusion isn’t illegal, forcing Sunny Hostin to school her.

House Democratic committee chairs have sent out over 80 letters requesting documents and interviews in a renewed effort to investigate Trump’s various misconduct and criminal activity after two years of Republicans doing everything possible to protect him when they ran the committees.

The number of investigations is staggering due to the fact that there is just so much corruption to probe stemming from the Trump Organization to the Trump inaugural committee to Trump’s 2016 campaign to his administration which includes crimes ranging from campaign finance violations to obstruction of justice, money laundering, perjury, conspiracy, tax evasion, insurance fraud, etc….

Only Abby Huntsman agreed with her before Anna Navarro identified what she feels the committees should focus on.

“The intelligence committee has a duty to investigate whether this campaign of Trump’s colluded with Russia,” Navarro said. “The oversight committee, I think, should do what Alexandria Ocasio-Cortez is saying they should do, and what you guys are saying: follow the money.”

Rep. Ocasio-Cortez (D-N.Y.) brilliantly laid out a case for pursuing Trump’s tax returns by getting Michael Cohen to admit under oath that Trump inflated his wealth and committed insurance and tax fraud, which tax returns would prove once Congress obtains them.

McCain agreed with Ocasio-Cortez wanting to follow the money, but disagreed with Navarro on collusion.

“Collusion is not a crime, though,” she said. “It makes me angry as well. I think if you collude with a foreign adversary, you know the problems I have with that. But it is not a crime.”

WILL DEMOCRATS TRUMP PROBE BACKFIRE? The co-hosts discuss the most expansive inquiry to date since Democrats regained control of the House into allegations of obstruction of justice, corruption and abuse of power by Pres. Trump. https://t.co/WtxvwQmbOu pic.twitter.com/kcWcmn22g7

Hostin is correct. Special Counsel Robert Mueller would likely charge trump with conspiracy against the United States instead of collusion, a term Trump and his lawyer Rudy Giuliani have desperately used to argue for Trump’s innocence based on semantics instead of the law.

Conspiring with foreign agents to win an election is a crime, and Trump’s campaign not only met with Russian agents inside Trump Tower to get dirt to use against Hillary Clinton, Trump himself asked Russia to find Hillary’s emails and he used Roger Stone as an intermediary to inform him of impending Wikileaks releases containing emails hacked by Russia. Furthermore, Cohen testified that Trump knew about the Trump Tower meeting.

Clearly, conspiracy is on the table. Trump can claim he never colluded with Russians all he wants. The question is did he conspire with them? On that, the evidence is against him. And McCain should know better than to repeat Trump’s pathetic defenses, especially when a former federal prosecutor is sitting next to her.