Less than one week ago, New York Governor Andrew Cuomo (D) signed into law a bill that protects and expands women’s access to abortion in the state. The new law, the Reproductive Health Act provides abortion access to women, even if Roe V. Wade is overturned by the Supreme Court of The United States. It also gives a woman the option to undergo an abortion after 24 weeks — if the woman’s health is at stake or the fetus is not viable.

But if you listened to this discussion between Fox News commentator Katie Pavlich and Dr. Omar Hamada, you’d have heard women were having recreational abortions and that there is never any reason to abort a fetus in the third trimester, Raw Story reports.

“So this New York abortion law which allows abortion up to the day before birth is, essentially, a recreational abortion bill,” Pavlich said.

“I thought it was a travesty,” Hamada said. “You know, there are some reasons that we will end a pregnancy in the first trimester or other reasons in the second trimester, but there’s absolutely no reason to end a pregnancy so that the child dies in the third trimester.”

First, since I’m not familiar with the phrase “recreational abortion,” I looked it up. And second, before I provide the definition, let me tell you Pavlich and Hamada are wrong.

So what is recreational abortion?

Issuepedia states that the term refers to abortions made necessary by pregnancy due to recreational sex, especially in cases where pregnancy and abortions happen repeatedly when contraceptives aren’t used.

Some of the hysteria regarding late-term abortion is fueled by comments President Donald Trump made during his 2016 campaign when he erroneously claimed that current abortion laws allowed doctors to “rip the baby out of the womb of the mother just prior to the birth of the baby,” The Guardian reported. For some right-wingers that sentiment has never gone away.

But women who undergo late-term abortions either do this because they do not wish to cause a fetus additional pain or because the pregnancy is life-threatening to their very own health.

“Abortions that occur in this stage of pregnancy are often the result of tragic diagnoses and are exactly the scenarios wherein patients need their doctors and not obstructive politicians,” said Stanford University’s Dr. Jennifer Conti in an interview with The Guardian. “Asking a woman to carry a fatally flawed pregnancy to term is, at the very least, heartbreaking. I’ve often heard women say that they chose to end such pregnancies because of unselfish reasons: they couldn’t bear the thought of putting their fetus through even more pain or suffering.”

Conditions like diabetes, high blood pressure (especially eclampsia) can put the health of the mother and baby at risk, the CDC notes. And another disturbing condition called severe maternal morbidity (SMM) is on the rise in the U.S. The CDC said it’s not really clear why this condition is on the rise but notes that maternal morbidity may stem from physical and psychological conditions resulting from, or aggravated by pregnancy. SMM currently affects more than 50,000 women in the U.S. each year.

The possible reasons for this condition are many and are likely due to a combination of factors: a woman’s advanced age, obesity, pre-existing chronic medical conditions, and cesarean section.

All of which means Hamada is misleading people when he claims there’s no reason to abort a fetus in the third trimester.

In the interview, Hamada told Pavlich he would prefer that women would let their fetus die instead of having a late-term abortion. And apparently, he’s feeling picked on.

“Remarkably, there’s a group of female physicians and nurses who have come out very hard, trying to threaten my career,” he told Pavlich. “I’ve gotten some death threats which I don’t really take seriously.”

He blames the left for this but doesn’t stop to consider that perhaps the doctors and nurses who are fighting him may be doing so out of concern for the mother as well as the baby. No, he’s completely tone-deaf.

“I think that’s just a common method that the left uses, they want to invalidate and destroy,” he said. “There’s no desire for common ground.”

Pavlich interviews Hamada in the video below. 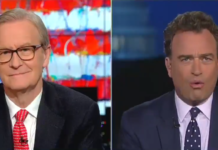