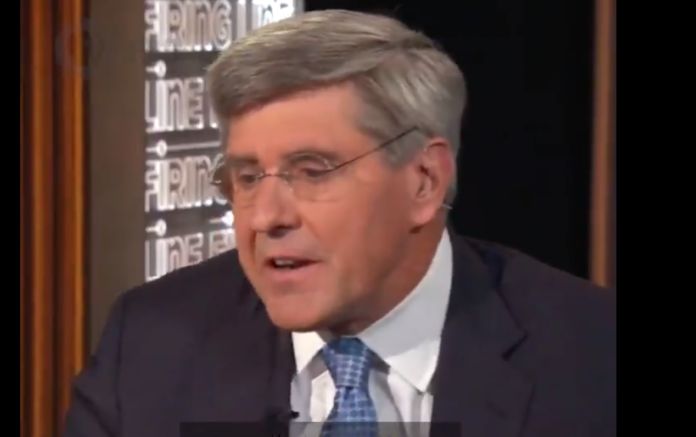 President Donald Trump’s nomination of Stephen Moore to serve on the Federal Reserve Board is in big trouble, with several Republican Senators saying they won’t vote to confirm Moore.

And now Moore has added another controversy to his already repugnant remarks about women, with a videotape of something he said about former President Barack Obama coming to light.

Speaking with Margaret Hoover on the PBS show “Firing Line,” Moore was asked about a “joke” he told in 2016 when he said that Trump’s election meant the president-elect would be “kick(ing) a black family out of public housing.” Asked about that, Moore told Hoover:

“So, you know, that, that is a joke that I always made about, you know, Obama lives in, you know, the president lives in public housing. But I didn’t mean it like a black person did.”

Despite the hole he was already in, Moore kept digging:

“I just meant that, you know, you know, being in the White House, you know, for example, when I was working with a lot of women in families who were involved in the education voucher program, you know, here in DC, and people would say, well, you know, and these were, these were blacks who would say, you know, why does Barack Obama get to send his kids to any school that he wants to and we can’t? And they’d say, he lives in public housing, and it was just kind of a joke, and that was referring …”

Hoover was quick to remind Moore that that “optics” of “a conservative white man talking about kicking a black man out of public housing have a particular resonance, especially in this moment.”

Moore agreed, saying he “shouldn’t have said it.”

Though he had already shot himself in the foot, Moore then tried to excuse what he’d said about women with another ridiculous non-apology:

“Again, you can, you go back 30 years, you’re going to be able to find clips over and over and over again about me. I have a long paper trail. I mean there’s no question about it. And I say things that are kind of jokes that if people want to pick them apart, then I probably won’t, you know, get on the Federal Reserve Board.”

And it appears Stephen Moore will not get on the Federal Reserve Board. The only person he has to blame for that his himself and his bigoted mouth.

.@StephenMoore explains his 2016 joke about Donald Trump moving into the White House and kicking “a black family out of public housing.” Moore says, “That is a joke I always made,” adding he didn’t mean it “like a black person” lived there. “I shouldn’t have said it,” he says. pic.twitter.com/9EO9JzBgtW