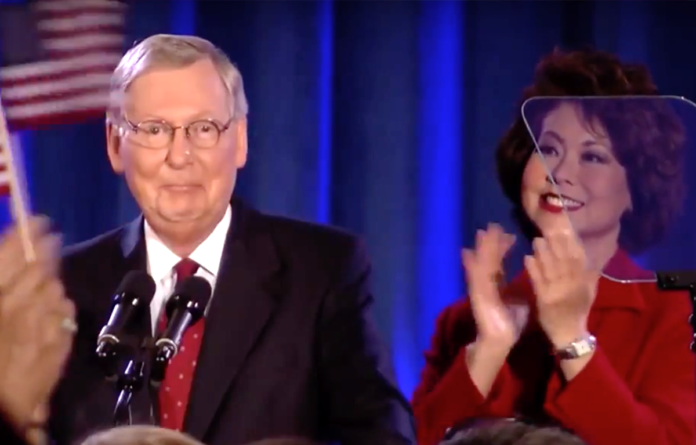 The conflicts of interest of the Senate Majority Leader Mitch McConnell have been plentiful this year, with reports about investments in Kentucky by a Russian oligarch’s aluminum company, which McConnell helped by lifting sanctions. More and more the focus is also falling on Mitch McConnell’s wife, Transportation Secretary Elaine Chao. Now a report from the New York Times leaves little doubt about the tangled web of interests and ethical problems between McConnell, Chao, and at least three countries: China, Russia, and America.

Elaine Chao is the subject of a new call for ethics investigations by Scott Dworkin and the Democratic Coalition.

Elaine Chao’s father is James Chao, founder of the Foremost Group in 1964, a New York-based shipping, trading, and finance enterprise. He is also a board member of China State Shipbuilding. The Chao family have routinely met with top leaders of China as James Chao’s former schoolmate was a future president of China, Jiang Zemin. Now Elaine’s sister Angela runs Foremost.

Angela Chao has denied that Foremost has received $300 million in loans from a bank run by the Chinese government, the Export-Import Bank of China, or China Eximbank. The Times says the money extended until 2015. A detailed map shows that most of the ship routes lead back to China.

Last week attention focused on Chao when she failed to divest from her stock in a construction-materials company, Vulcan Materials Co., although she promised to divest herself when she was confirmed as U.S. transportation secretary in 2017. The company increased in value dramatically since she took the position in the Trump administration.

According to the Kentucky Courier-Journal:

“Ethics experts say that Chao’s ownership of the stock doesn’t present a legal conflict of interest, but they say it doesn’t look good to have the transportation secretary profiting from a company that does business with her cabinet — even if she does as she has promised and recuses herself from all matters involving Vulcan.”

Meanwhile, Senator McConnell is seeing a windfall from Russia, with an investment of $200 million in Kentucky from Russian oligarch Oleg Deripaska’s aluminum company Rusal and Braidy Industries, Inc., a U.S-based holding company. That investment came soon after McConnell used his position to ensure sanctions against Rusal were lifted despite everything Trump-Russia dominating the news.

Interesting news on Elaine Chao & Mitch McConnell. Also, don’t forget Mitch McConnell removed sanctions against Deripaska who then turned around and invested hundreds of millions into a Kentucky “aluminum” operation. Chao & McConnell are compromised and so is this country. https://t.co/rqlbqigVMy

These deep connections to the top of the Chinese government outlined in the Times article are obviously alarming but Chao failed to disclose them in her confirmation hearing.

“With Mr. Trump’s election, Ms. Chao was asked to join the administration. During her confirmation hearing, she did not discuss her family’s extensive ties to the Chinese maritime industry, and she did not disclose the various Chinese accolades she had received. The Senate’s written questionnaire requires nominees to list all honorary positions.”

The Transportation Department spokesman said, “It was an oversight.”

The Chao family has been particularly profitable for Mitch McConnell, who rose quickly to become one of the wealthiest senators thanks to their extravagant gifts. Chao’s extended family have been top contributors to the Republican Party of Kentucky for decades.

“In all, from 1989 through 2018, 13 members of the extended Chao family gave a combined $1.66 million to Republican candidates and committees, including $1.1 million to Mr. McConnell and political action committees tied to him, according to F.E.C. records.”

So when Chao apparently tried to bring a family member along on her first scheduled visit to China as a Trump cabinet member, it raised ethical questions from an official at the American Embassy in Beijing. A former State Department official called it “alarmingly inappropriate.”

While serving as Transportation Secretary, she has presided over reduced federal funding for programs that support the shipbuilding industry and ships that operate under American flags, even though America’s shipping industry struggles to compete with China.

“The agency budget in 2017 and 2018 also proposed reducing annual grants for the Maritime Security Program, which help American ships pay crews and cover the cost of meeting safety and training requirements.

It also moved in the last three years to eliminate new funding for a grant program that helps small shipyards stay in business, as well as a program that provides loan guarantees for the construction or reconstruction of American-flagged vessels.”

The Times noted that Chao has not issued a detailed strategic plan for stabilizing the United States’ shrinking fleet. As Trump’s trade war with China escalates it seems doubtful that such a plan would be implemented in the near future.

Is it her fault or Trump’s fault? Who can say?

Elaine Chao traveled to China last April without family members present, but she for some reason chose to fly on a Chinese state airline instead of an American carrier although a United flight would have been less expensive.

Although this seems to be just typical behavior for the Trump administration, these are all red flags that would stand out like a sore thumb were it not for the constant ethical issues from today’s Washington.

See more commentary from the “Ring of Fire” below: