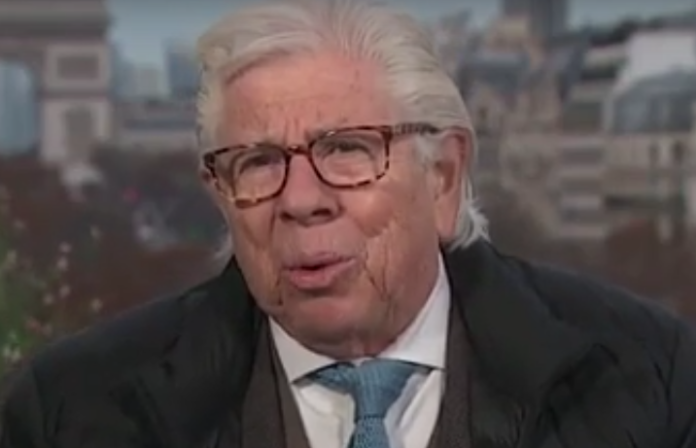 Legendary Watergate journalist Carl Bernstein observed on Tuesday that President Donald Trump is boxed in by all of the investigations against him and his family, but also by his own behavior in an effort to desperately defend himself on Twitter.

Trump has been spending most of his mornings lately whining about the Russia investigation, Michael Cohen’s plea deal implicating him in campaign finance felonies, and Michael Flynn’s impending sentencing for lying to the FBI.

Within those Twitter tantrums, Trump has been his own worst enemy by implicating himself, like when he called Cohen a “rat” and claimed that the hush money payments to women are just “private transactions.”

Trump even admitted that Flynn lied to the FBI while trying to claim that the FBI entrapped him.

Trump also admitted that his son met with Russian inside Trump Tower during the 2016 Election to “get information on an opponent.”

During an appearance on CNN, host Poppy Harlow asked Bernstein how badly Trump has been boxed in by Mueller.

Indeed, even former FBI agent Asha Rangappa said that Trump’s legal team should take extreme measures to shut their client up and keep him off Twitter because he’s just making his legal problems worse. And let’s not forget that Mueller is actually using Trump’s tweets to build a case against him.

Asked to analyze Flynn’s role in Trump’s legal troubles, Bernstein said that it is not just about Flynn’s conversations with Russians, but also his discussions with Trump and other members of the campaign.

“What’s really important here is that Michael Flynn went into the campaign in April of 2016 as a national security adviser to the campaign and was in a crucial position where he talked to Trump throughout the campaign, he talked to Paul Manafort all the time while Manafort was apparently dealing with Russians,” he said.

Bernstein went on to say that Mueller’s impending report will likely show Trump obstructed justice and colluded with Russia in some way “wittingly or unwittingly” and that his family could also go down, especially Donald Trump Jr., who met with Russia agents in July 2016 to get “dirt” on Hillary Clinton.

“So, he is boxed in, but he’s also boxed in by the way he has conducted himself,” Bernstein concluded. “We’ve never seen a president of the United States who actually acts more, in some ways, like a common grifter…a flim-flam artist, a conman, someone who lies.”