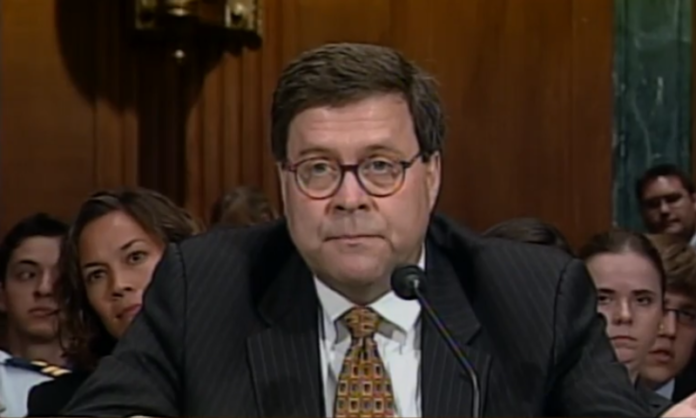 While the Justice Department and Attorney General William Barr continue to insist that President Donald Trump cannot be indicted because he’s the president, a former Justice Department official who served during the Watergate scandal has blown a hole in the memo used as precedent to make that determination.

J.T. Smith II served as an executive assistant to Attorney General Elliot Richardson when the 1973 memo was written by Special Prosecutor Leon Jaworski.

That memo has been used ever since to protect presidents from an indictment, ensuring that they can commit any crimes they want while in office while flouting the rule of law and guaranteeing that equal justice doesn’t exist in our country.

But in an op-ed for the New York Times this week, Smith provides more context surrounding the purpose of the memo and calls for Barr to indict Trump if Special Counsel Robert Mueller recommends charges against him in his anticipated final report to conclude the Russia investigation.

“As executive assistant to President Richard Nixon’s attorney general, Elliot Richardson, I can speak to the circumstances that delivered that first opinion,” Smith wrote. “The principal purpose of the 1973 Watergate-era legal opinion — which concluded that a sitting president cannot be indicted — was to aid in removal from office of a criminally tainted vice president, who, the memo concluded, could be indicted.”

“But it was not intended to set an ironclad precedent that would forever shape how a president might be treated,” he continued, going on to point out that other legal experts have come to the opposite conclusion, including a 1998 memo written by law professor Ronald Rotunda known as the Starr memo that says the president can be indicted.

“The durability of the Office of Legal Counsel’s 1973 opinion is curious,” Smith wrote. “It was prepared under extraordinarily stressful and unique circumstances — borne from the investigations that led to the resignations of Vice President Spiro Agnew that year and President Nixon in 1974.”

In fact, Nixon had already resigned by the time the memo was released in 1974 and would be pardoned by former President Gerald Ford in a controversial decision.

But Smith believes Barr should strongly consider indictment if Mueller’s report implicates Trump in a crime and recommends charges regardless of what one memo says. After all, the more recent 1998 memo says the president can be indicted.

“Mueller’s investigation has brought us to face similar questions of institutional integrity and transparency for the American public,” he wrote. “If Mr. Barr determines that Mr. Mueller’s findings compel legal action, he should reconsider the policy against indictment of a sitting president.”

He then concluded by calling for the Mueller report to be released to the public and warned that the preservation of our democracy and nation depends on transparency.

In light of the gravity of our circumstances, it would be timely and appropriate for the Justice Department to reconsider the shaky policy regarding indictability of a sitting president and provide Congress and the public with the Mr. Mueller’s full findings and conclusions. Only through sunlight and transparency can we preserve confidence in our national institutions and leadership.

The president is not above the law and should not be above the law. We have a presidential line of succession for a reason. Indicting Trump would not be the end of our government, it would cleanse it and rid us of a corrupt criminal who is hiding behind the office to get away with his crimes. No American has the same kind of privilege and neither should the president. As Smith said, the Jaworski memo is not an ironclad ‘get out of jail’ free card. It’s been contradicted by a more recent memo, a memo that should at least have equal standing in the Justice Department.

Our country needs to set an example. Trump could be guilty of many crimes beyond the ones Mueller is investigating, and the American people overwhelmingly believe that he has committed crimes. It’s time for Barr and the Justice Department to step up and deliver equal justice under the law.