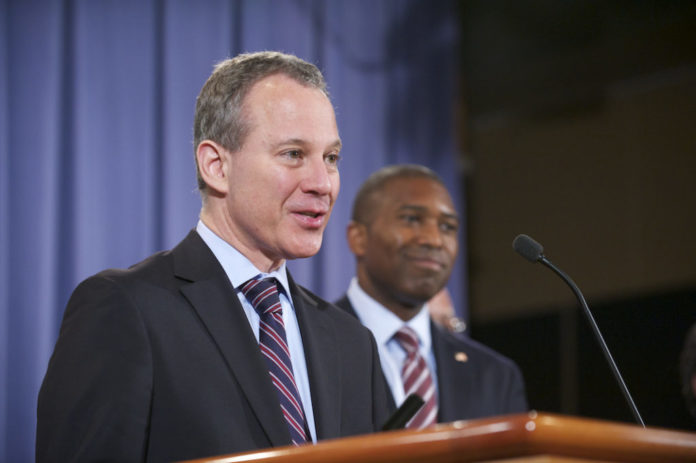 New York’s Attorney General Eric Schneiderman made a bold move on Sunday in an effort to prevent Harvey Weinstein from making a profit when the Weinstein Company goes up for sale. He sued the company and Weinstein personally on behalf of the women who allege Weinstein of sexual assault.

According to NBC News, the lawsuit alleges that employees of the former Holywood powerhouse and his company endured:

Schneiderman’s office sued to make sure that in the event of the company’s sale, for which negotiations have been taking place for weeks, compensation will be ensured for Weinstein’s alleged victims. The company under new ownership would also require oversight in order to prove that the culture is safe for all employees.

The lawsuit targets not only Weinstein and the company, but also his brother, Bob Weinstein. A $500 million dollar deal to sell the company was expected to be inked in the next week – former President Barack Obama’s head of the Small Business Administration, Maria Contreras-Sweet, backed out of the deal after the lawsuit was announced.

Schneiderman filed the lawsuit specifically with the victims in mind. He said that the potential sale could:

“…Leave victims without adequate redress, including a lack of sufficient victims compensation fund.”

The Attorney General is clearly worried about the potential payout that Weinstein and his brother could receive despite the fact that Weinstein may face criminal charges.

Contreras-Sweet had proposed a $50 million victims compensation fund, but Schneiderman’s spokesman, Eric Soufer, said that such a fund was not found in the deal as a part of the office’s review.

“…The proposed terms of the sale would allow the perpetrators or enablers of the misconduct to see a windfall, and allow top officials at TWC who share responsibility for the misconduct to serve in executive positions of the new entity – where they would again oversee the adjudication of [human resources] complaints, including those of sexual harassment, intimidation, and assault.”

The lawsuit accuses Weinstein of hiring “wing women” to facilitate his abuse and claims that he bragged about having Secret Service contacts who could run interference. Weinstein’s drivers in Los Angeles and New York were required to keep the cars stocked with condoms and erectile dysfunction injections at all times.

Weinstein has denied all “allegations of non-consensual sex” against him.