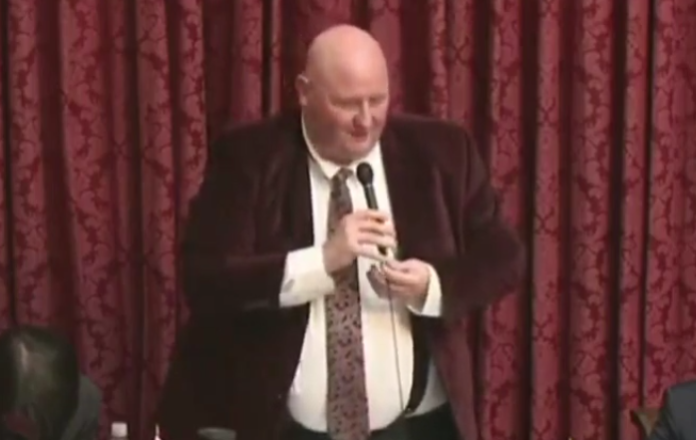 A West Virginia Republican is under fire this week for comparing the LGBTQ community to the Ku Klux Klan (KKK), but his fellow Republicans don’t think it’s a big deal.

GOP state Rep. Eric Porterfield supports a bill that would have “allowed for the discrimination of gay and lesbian people in cities that have passed ordinances expressly forbidding it,” according to the Charleston Gazette-Mail.

To argue in support of the bill, Porterfield launched an all-out bigoted attack against the LGBTQ community.

“The LGBTQ is a modern day version of the Ku Klux Klan, without wearing hoods with their antics of hate,” Porterfield said in an interview Friday morning. He also called the gay community a “terrorist group” and said he is being “persecuted” by the gay community in retaliation for his remarks, including receiving threats on Facebook and voicemails.

“The LGBT is the most socialist group in this country,” Porterfield continued. “They do not protect gays. There are many gays they persecute if they do not line up with their social ideology.”

The conservative lawmaker also used the word “f*ggot” and even supports gay conversion therapy, which has been condemned by the medical community and is why Porterfield ran for office.

In response to his outrageous remarks, Democrats condemned him one by one in speeches on the House floor while Republicans practically gave him a medal while dodging whether or not Porterfield will be punished.

GOP House Speaker Roger Hanshaw said, “I hope that no one would make those kind of statements. That sounds like nothing I would certainly ever agree with, but I would want to talk to him before I comment on what he said.”

That sounds like code for pretending to give a damn while having no intention of actually doing something about it.

Porterfield’s remarks come on the heels of Vice-President Mike Pence being roundly criticized for his anti-gay agenda and his wife’s controversial decision to work at a school that forces employees to sign an anti-gay pledge. It also follows President Donald Trump’s vicious attack on socialism during his State of the Union address.

This is hate speech that’s being openly peddled in the West Virginia statehouse. And it’s the precise reason why Republicans are having such a difficult time growing their party. When hate like this is accepted within a party, voters notice and most of them reject it because they have a family member or friend who is LGBTQ and they see how such bigotry affects their lives every day.

Porterfield’s remarks incite violence against LGBTQ people, and if someone is hurt or killed because of his hate, he should be held legally responsible.