The United States Blues
Home Health Whistleblower: How Big Pharma acts like a cartel and fixes prices through... 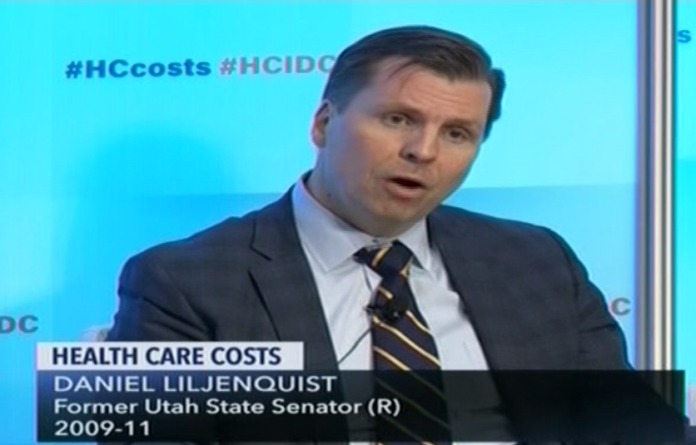 Former Utah state lawmaker and nonprofit generic drug company chairman Dan Liljenquist blew the whistle on Big Pharma and how for-profit pharmaceutical companies collude with each other to jack up the prices of drugs to get rich.

Liljenquist runs Civica Rx, a nonprofit generic drug company that actually seeks to get people the medication they need at a reasonable price.

As we all know, Congress is now investigating Big Pharma for the overpricing of life-saving drugs Americans need, a price tag that ends up forcing patients to choose between bankruptcy and death.

Big Pharma executives have even admitted that they hate low drug prices during congressional testimony.

So, it came as no surprise during a panel discussion on drug prices earlier this month when Liljenquist explained how Big Pharma companies act like a cartel by colluding with each other to raise prices and get rich rather than competing.

“It would be terrifying if there were collusion that actually happens,” the moderator began. “Do people collude in this space?”

“There are a lot of challenges with this market,” Liljenquist replied.

“I had an interesting conversation with a pharmaceutical company executive,” he continued. “He had sold his business years ago for $540 million. I caught him in Miami as he was driving to buy his new boat.”

Liljenquist wanted to talk to the former executive about his non-profit drug company.

“He said the first thing you should know about pharmaceuticals is that we all collude,” Liljenquist said. “It’s the dirty secret. But you also need to know that we don’t have to talk to each other to collude. We watch what people do with price and we mirror it.”

The former executive apparently walked Liljenquist through several examples of how he built his multi-million dollar business “by watching signals in the market.”

A competitor had dropped the price of a suppository down to $2.00, only to then start raising the price until it reached $36, or double the original cost of $18. Both companies matched each other instead of competing and both got rich.

Liljenquist then observed that the same collusion is happening with insulin prices, which have reached over $1,000 for a vial of the life-saving dosage diabetics need.

The matching is a public signal between companies that they are not going to start a price war. As a result, the companies make a lot of money and people who desperately need insulin but can’t afford it, die.

That’s not how the free market is supposed to work.

“And that’s how you get cartel behavior in this space,” Liljenquist said. “Typically, you would regulate this environment,” he concluded, going on to say that Big Pharma kills regulatory action by paying lots of money to lawmakers and warned that the drug industry has direct access to the United States Treasury.

Again, this is not how the free market is supposed to work. This is how a racket works. Instead of conspiring to raise prices on drugs, companies should be competing with each other to offer lower prices.

Not everyone can pay the steep price greedy executives are demanding, and that means people die or go bankrupt trying to save themselves. That’s unacceptable and the system must be drastically changed.

American drug companies should not be allowed to get away with this practice, and that’s why it’s time to enact universal healthcare and establish price controls on medicine so that this kind of greed never harms anyone again.