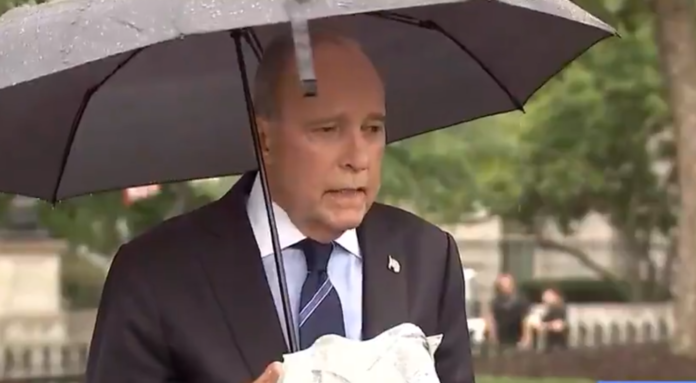 According to Larry Kudlow, who serves as director of the National Economic Council, President Donald Trump “doesn’t make things up” (i.e. lie) and it’s “very rude” to suggest otherwise.

Kudlow was asked about Trump’s lack of veracity in regard to an event that took place on Monday involving foreign policy, HuffPost notes:

On Monday, Trump told reporters at the White House that he’d been personally asked by India’s prime minister, Narendra Modi, to mediate the dispute over Kashmir.

“I was with Prime Minister Modi two weeks ago,” said Trump. “He actually said, ‘Would you like to be a mediator or arbitrator?’ I said, ‘Where?’ He said, ‘Kashmir.’ Because this has been going on for many, many years. I was surprised at how long it’s been going on.”

Trump also said he’d “love to be a mediator.”

The Indian government, however, says the request was never made, meaning that Trump flat-out lied, as he so often does. Specifically, Indian government spokesman Raveesh Kumar issued a statement that “no such request has been made” of Trump.

We have seen @POTUS‘s remarks to the press that he is ready to mediate, if requested by India & Pakistan, on Kashmir issue. No such request has been made by PM @narendramodi to US President. It has been India’s consistent position…1/2

…that all outstanding issues with Pakistan are discussed only bilaterally. Any engagement with Pakistan would require an end to cross border terrorism. The Shimla Agreement & the Lahore Declaration provide the basis to resolve all issues between India & Pakistan bilaterally.2/2

The fact that Trump lies pathologically is not exactly news. After all, PolitiFact awarded Trump its “Lie of the Year” in both 2015 and 2017. The Washington Post even keeps a running tab on Trump’s lies, reporting that he’s made at least 10,000 false or misleading statements as of April. And Vox reported this week that the president managed to lie six times over the course of 90 seconds!

It’s not the least bit rude to point out that a person is a liar who makes things up. And it’s downright pathetic that Larry Kudlow feels a need to join in the lies just to be a sycophantic suck-up.