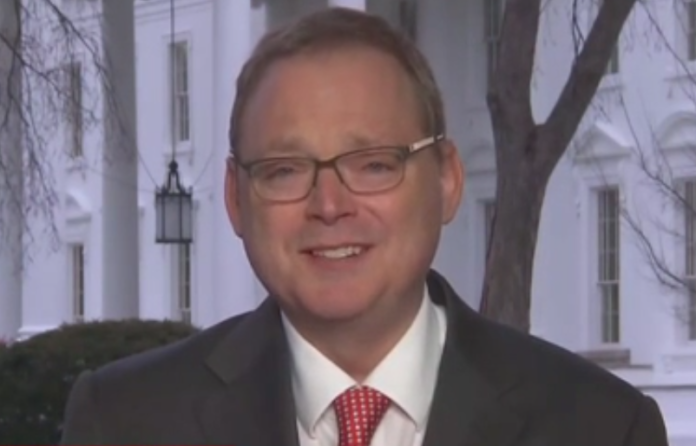 President Donald Trump’s government shutdown could result in an economic quarter with “zero growth” or worse according to White House economic adviser Kevin Hassett on Wednesday.

During an interview on CNN, Hassett was grilled by host Poppy Harlow, who demanded to know if the shutdown will result in the first quarter of “zero” GDP growth in an economy that should not have such terrible growth rates.

“Of course it looks like folks are gonna once again miss a check and there’s a lot of enormous focused personal cost,” Hassett said. “A lot of the cost that we’re feeling right now is going to be at the individual level. On the macroeconomic level, on the overall economy, there’s a loss of about a tenth of a percent of GDP each week.”

In short, the 800,000 federal workers who have been furloughed or are working without pay are feeling the cost of the shutdown first, but it’s going to spread to the entire economy at some point, especially if Trump drags the shutdown out for months or years as he has threatened.

Harlow demanded to know if the result will be a GDP growth of zero in the first quarter.

“The first quarter has tended to be weak,” Hassett said while trying to avoid answering the question directly, but Harlow remained persistent.

Hassett finally had to admit that Trump’s shutdown could result in the first quarter of zero growth, which would only get worse from there.

“We could, yes,” he said. “If it extended for the whole quarter and given the fact that the first quarter tends to be low because of residual seasonality, you could end up with a number very close to zero.”

White House economic adviser Kevin Hassett tells @PoppyHarlowCNN the United States could end up with “zero” growth in first quarter, “if [the shutdown] extended for the whole quarter” https://t.co/8wutooEekQ pic.twitter.com/QoQexOIDgA

It’s outrageous that Trump is sabotaging the economy by continuing the shutdown, but it’s also outrageous that Hassett kept smiling while forecasting the probable economic catastrophe. One would think that he would take this more seriously. Because as the economy sinks, the more likely our nation is to fall in a recession, all because Trump refuses to give up his demand for a useless wall on the southern border that will cost Americans more in the long run and do nothing to solve immigration issues.

The United States having a “zero growth” quarter would be the first time it has dropped that low since the first quarter of 2014, and that was still during a time of economic recovery from the Great Recession in 2008.

Trump has repeatedly bragged about GDP growth, but it’s doubtful he’ll brag about this quarter. He’ll likely try to blame Democrats for it rather than take responsibility for the damage he has caused. And as the shutdown drags on it could result in negative growth that will spook investors and cause a domino effect of economic chaos around the globe.

And it’s completely owned by Trump and his Republican allies in Congress.