The United States Blues
Home Politics Congress White House Goes All In To Save Mississippi Senator Who ‘Joked’ About... 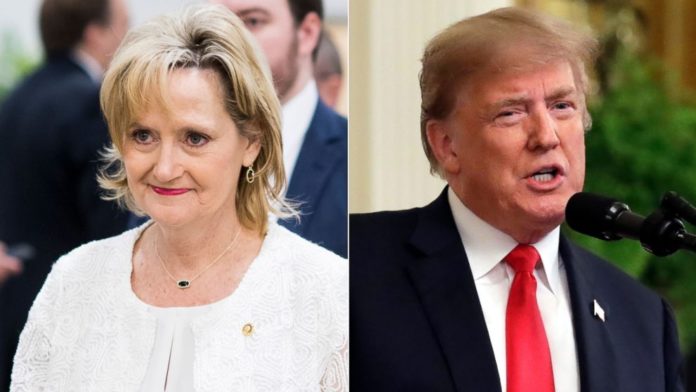 On November 27, a runoff will be held in Mississippi for a Senate seat currently held by Republican Cindy Hyde-Smith. Hyde-Smith is facing Democrat Mike Espy, who also happens to be African-American.

Just last weekend, Hyde-Smith was seen on video saying of a supporter:

“If he invited me to a public hanging, I’d be on the front row.”

After the video of Hyde-Smith’s disgusting remarks surfaced, she tried desperately to change the subject, commenting:

“In a comment on Nov. 2, I referred to accepting an invitation to a speaking engagement. In referencing the one who invited me, I used an exaggerated expression of regard, and any attempt to turn this into a negative connotation is ridiculous.”

And now, despite the fact that joking about lynching in Mississippi — a state that has a horrific history of racially-based discrimination and violence — the national GOP and White House are signaling that they fully support Hyde-Smith, according to Politico:

“National Republicans are mobilizing to shore up a Mississippi Senate seat that a few days ago was barely on anyone’s radar, with the party poised to spend at least $1 million on a TV advertising campaign and the White House weighing a pre-runoff trip by President Donald Trump.”

While it should probably come as no surprise that President Trump would have no problem supporting a candidate who made such an insensitive joke, the very fact that both Trump and the Republican Party are willing to paper over Hyde-Smith’s remarks only serves to reinforce what we’ve long suspected: That the GOP is a party of the white, the wealthy, and the privileged. They appear to have no intention of expanding their base of support, and that may well doom them to the status of consistent losers as the American population gets younger, more diverse, and more progressive.

Now that the GOP seems so intent to bolster Hyde-Smith despite her appalling comments, Democrats are also taking an interest in the upcoming runoff:

“And this weekend, California Sen. Kamala Harris, who is African American, is slated to campaign with Espy.”

Though Trump won Mississippi by almost 18 points in 2016, 40 percent of the state’s population is African-American. And as the GOP found out last year in the Alabama Senate race that featured Roy Moore as the Republican candidate, blacks in the South are faithful voters, and they were one of the main reasons that Alabama now has a Democratic Senator instead of one who allegedly has a perverse fascination with young girls.