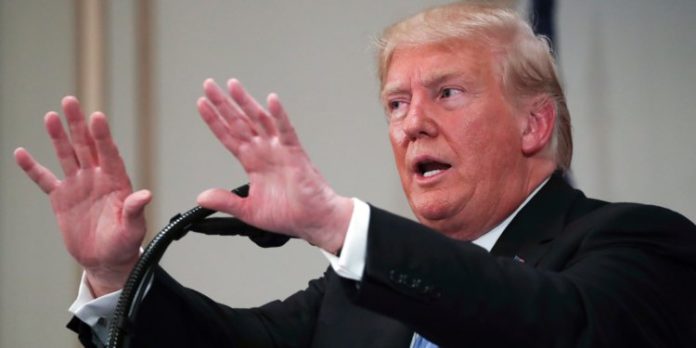 Despite saying Tuesday that he would release the full whistleblower complaint of a call he had with the president of Ukraine, President Donald Trump and the White House are now indicating that they are only willing to share a “redacted version” of the report, the New York Times reports:

“White House and intelligence officials were working out a plan on Tuesday to release a redacted version of the whistle-blower complaint that helped ignite the impeachment drive against President Trump and to allow the whistle-blower to speak with congressional investigators, people briefed on the matter said. The move toward disclosing more information demanded by Democrats was part of a broader effort by the administration to quell the growing calls for Mr. Trump’s impeachment, and became public after Speaker Nancy Pelosi announced the start of a formal impeachment inquiry.”

Trump wants to released a REDACTED version of the whistle-blower complaint. pic.twitter.com/n7cWtEMbuL

This latest attempt at stonewalling by the administration comes less than 24 hours after the U.S. Senate voted 100-0 on a resolution stating that the White House needs to turn over the whistleblower complaint to the House and Senate intelligence committees.

In an interview on CNN Wednesday morning, Senator Chris Murphy (D-CT) said only an unredacted version of the complaint would be acceptable:

“It needs to be unredacted. I don’t want the [Trump] administration deciding what parts of that whistleblower complaint get to us and what don’t.”

“It needs to be unredacted. I don’t want the [Trump] administration deciding what parts of that whistleblower complaint get to us and what don’t.”

Some are suggesting that Congress cannot allow for the White House to control the narrative the way they did with the Mueller report. In that case, Attorney General William Barr released a so-called “summary” of the special counsel’s findings weeks before he made a redacted version of the full report available to congressional committees and the public.

Esquire‘s Jack Holmes had this to say on the matter of a redacted whistleblower report:

“The political media in particular must not make the same mistakes that many made when Barr released his letter, taking its claims at face value and producing headlines and news cycles that wrongly acceded to the Trumpian narrative that he was COMPLETELY EXONERATED! In fact, the report detailed numerous instances where the president obstructed justice.”

And Speaker of the House Nancy Pelosi (D-CA) made it clear that she too expects the full whistleblower report, noting when she announced the beginning of a formal impeachment inquiry on Tuesday:

“The law is unequivocal. It says the DNI, director of national intelligence, shall provide Congress the full whistleblower complaint.”