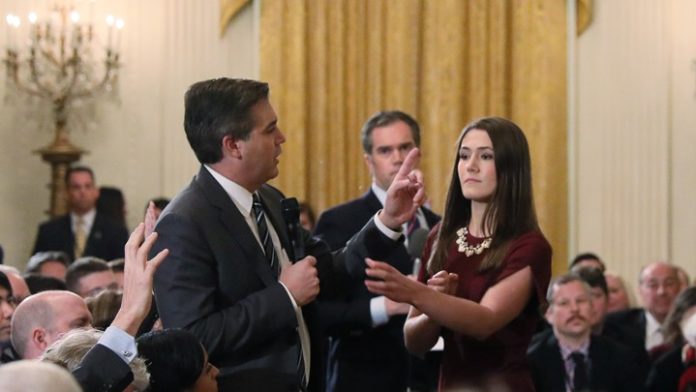 President Donald Trump doesn’t care if he violated First and Fifth Amendment rights of CNN reporter Jim Acosta or not, he has no intention of recognizing and obeying a court order requiring the return of his press pass.

As you may recall, Trump barred Acosta from the White House for simply asking questions he didn’t like and accused the veteran journalist of assaulting a White House intern who tried to forcibly take a microphone out of his hands as he attempted to ask a follow-up question.

The White House even used a doctored video to claim that Acosta inappropriately touched the female intern.

Of course, when CNN filed a lawsuit against Trump and the White House, the video and accusation were all of a sudden dropped from the reasons why Acosta was stripped of his press pass.

But rather than just admit they were in the wrong, Trump intends to defy the ruling by creating a paper trail to excuse banning Acosta again, thereby pretending to give CNN due process.

“If you thought the Trump administration would seek to settle CNN and Jim Acosta’s lawsuit out of court… think again,” CNN’s Brian Stelter wrote in a newsletter this weekend.

“After CNN won a temporary restraining order on Friday, forcing the White House to restore his press pass for 14 days, White House officials sent Acosta a letter stating that his pass is set to be suspended again once the restraining order expires,” the newsletter continued. “From the looks of the letter, the W.H. is trying to establish a paper trail that will empower the administration to boot Acosta again at the end of the month.”

This blatant doubling down on an unconstitutional action to punish journalists who ask tough questions should not be tolerated by any news organization or court of law. Trump’s actions were so repugnant that even Fox News supported the lawsuit.

“The White House is continuing to violate the First and 5th Amendments of the Constitution. These actions threaten all journalists and news organizations. Jim Acosta and CNN will continue to report the news about the White House and the President.”

Trump’s disregard for the rule of law and the vital role our free press plays in our democracy is egregious and no court in this country should let him get away with it. If Kelly ends up siding with Trump in his war against the press and the First Amendment, he will have demonstrated that he is not an independent judge who enforces constitutional law, but a mere toady who is paying Trump in return for his appointment to the bench.

The First Amendment is dangerously close to being usurped by a wannabe dictator. If the courts let Trump get away with this, it won’t be just the free press that is in peril, but free speech as a whole and the judicial branch as Trump will feel empowered to punish anyone who dares to criticize or challenge him without consequence.