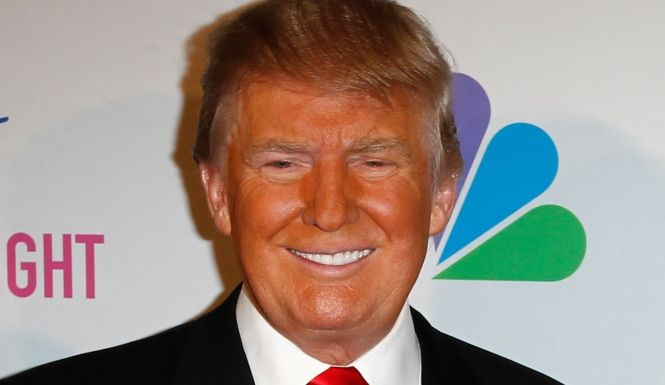 The first thing most people notice about President Donald Trump isn’t that rat’s nest of a coif atop his block head. Instead, it’s the orange hue that he seems to believe we’ll all just accept is a real tan.

Is the tan fake? It’s gotta be, right? No one is naturally the same tone as a tangerine. That color simply doesn’t exist in human skin tone.

But to hear the White House tell it, Trump’s “tan” is all natural, the result of “good genes,” according to Katie Rogers in the New York Times:

“The official line from the White House, as with other matters surrounding the president’s physical health and appearance, is that Mr. Trump’s glow is the result of ‘good genes,’ according to a senior administration official who would speak only on the condition of anonymity.”

Since it’s clear the president’s tan is fake, that leads to another question: Does he get it from a tanning bed? Former White House aide Omarosa Manigault-Newman said he did, even alleging that a presidential usher was fired for improperly handling transport of said device.

However, others who are familiar with the matter say there’s no tanning bed in the White House. No spray tanning booth, either. So how does Trump stay so damn orange?

Dr. Tina Alster, a top Washington dermatologist, says the president is using tanning creams or sprays to look like a walking Sunkist advertisement. But he clearly isn’t using them very well:

“He looks more orangy than he does tan.

“I have nothing against self-action tanning creams, but I think you need to be careful about how you apply it.”

In case you were wondering, Trump is also aware that he looks orange:

“Certainly Mr. Trump, who has long taken antibiotics to treat rosacea, a condition that can make the skin appear rosy and ruddy, is attentive to how he looks on television. He has complained that his skin and hair appear too yellow or orange on the screen, according to one person familiar with his views.”

So, while we still don’t know with absolute precision what Trump uses to obtain his distinctive color, it sounds like he’s using something. And he’s using it in a way that isn’t exactly flattering.