The United States Blues
Home News Why Alan Dershowitz is wrong about Trump issuing a ‘rebuttal’ to the... 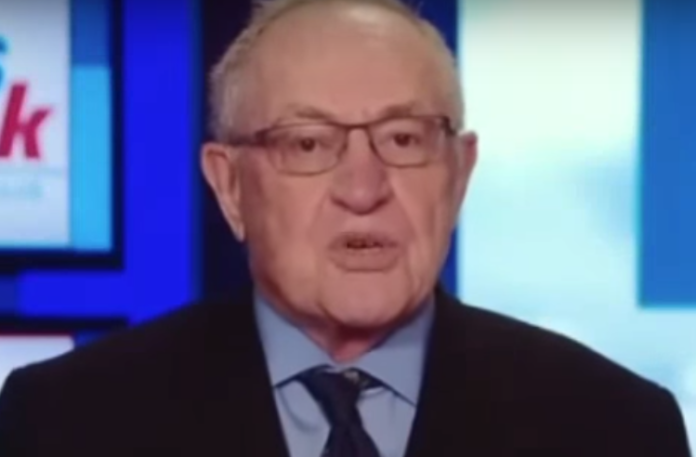 Alan Dershowitz desperately argued on Sunday that President Donald Trump should be allowed to issue a “rebuttal” to Special Counsel Robert Mueller’s final report concluding the Russia investigation, which would strike at the heart of how the justice system works.

Mueller’s final report is rumored to be on its way sometime in the next few weeks, and Trump’s lawyer Rudy Giuliani is hell bent on presenting an alternative report to undermine the conclusions reached after two years of evidence gathering and questioning witnesses that will determine what the assessment says.

Any report Trump issues will likely declare his innocence, not because of evidence or true investigation methods, but because Trump says so.

That’s not a valid legal argument, and it’s not one that defendants get to make in any court of law after being indicted or found guilty.

But Dershowitz insisted that Trump should get to do it and that the American people should “withhold judgement” until they read both reports.

“Remember, we’re going to see a rebuttal report from the Trump team,” Dershowitz said during an interview with ABC anchor George Stephanopoulos. “The American people should withhold their judgement until they see both reports.”

ABC’s chief of legal affairs Dan Abrams, who is also a trained lawyer, pointed out that such a rebuttal has never happened before and that it could open the floodgates to every defendant wanting to present an alternative report to a jury after they reach a verdict based on the evidence and testimony presented during the case.

“This will be the first time in American history where a defendant or someone that’s accused of something gets to write a response report to what an indictment is,” Abrams said. “Every criminal defendant in America would love to be able to write their own report about what they say happened. But that’s not the way the system works.”

Dershowitz wailed in response, accusing Abrams of “contradicting” himself while claiming that releasing the entire report to the public creates an obligation to allow a rebuttal.

No, it doesn’t. Trump has already responded on multiple occasion and has literally whined about the Russia probe or attacked Mueller over 1,000 times.

His lawyer Rudy Giulaini has also responded to it on countless occasions. And the best defense both men have come up is a story that has constantly changed from “no collusion” to “some collusion” to even if he did it it’s “not a crime.” What we can expect from the Mueller probe is the truth based on evidence and testimony. What we can expect from Trump is a rebuttal full of lies rooted in desperation and panic.

“That’s ridiculous,” Abrams told Dershowitz. “The idea that you have to allow the other side, in something like this, the opportunity to file a long report in response to a prosecutor.”

“You don’t have to do that if you just limit yourself to indictment or not indictment,” Dershowitz opined. “But if you go beyond it, you start telling a story, the other side of the narrative has to be produced as well. That’s required by fairness and due process.”

“Bill Clinton would have loved that,” Abrams quipped, referencing the fact that the former president did not get to write a rebuttal to the Starr report in the 1990s.

“Not in the regulations,” Stephanopoulos concluded.

Again, the idea that Trump should be allowed to release his own special version of what happened that will likely be full of lies is absurd. He already claims that he has done absolutely nothing wrong. To let him do so in a rebuttal report released at the same time is a mockery of the justice system, including the FBI agents and federal prosecutors who work hard every day to pursue evidence and testimony to make their cases.

Trump has zero access to the evidence, nor does he have access to the witness testimony. So, all he can do as usual is claim that everybody but him is lying while slandering Mueller and undermining a legitimate federal investigation. That should not be allowed to happen.