The United States Blues
Home Politics Congress Why is Rand Paul fighting sanctions on a Russian pipeline that could... 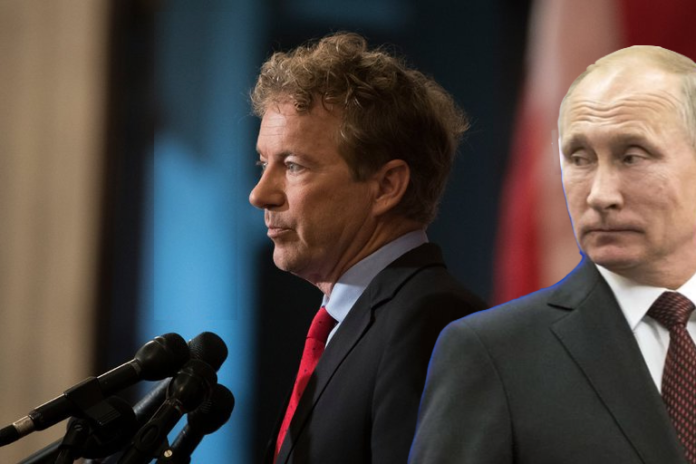 Officially, it’s known as the Nord Stream 2 project, a natural gas pipeline that would greatly expand Russia’s shipments of natural gas to Germany. But it faces tremendous opposition in the United States Congress because it would reportedly expand Russia’s influence in Western Europe. Even President Donald Trump has been critical of the project.

Kentucky Senator Rand Paul (R), however, is opposed to sanctions, and on Thursday he postponed a mark-up of proposed sanctions on the pipeline project, Betsy Woodruff reports for The Daily Beast:

And while Paul hasn’t publicized his opposition to the proposed sanctions, he sent Senate colleagues a letter before the mark-up explaining his stance. The letter, which The Daily Beast obtained, argues that the legislation in question—a bipartisan bill introduced by Sens. Ted Cruz and Jeanne Shaheen—doesn’t clearly state which entities would be sanctioned.

“This means that, ultimately, we are voting blind as to who will be sanctioned under this bill,” Paul wrote in the letter. “Congress would once again pass on our authority to the Executive Branch, thus abandoning our constitutional responsibility to make laws.”

The larger question is why in the world Paul actually cares what happens to a Russian company and a natural gas pipeline. What exactly his his angle?

There’s no doubt that the Nord Stream 2 project would be an huge financial boom for Russia:

Russia’s state-controlled natural gas export monopoly, Gazprom, is building the near-completed Nord Stream 2 pipeline. Its completion would let Russia double its natural gas shipments to Germany. Shortly before Trump’s friendly press conference with Russian President Vladimir Putin in July 2017, he ripped German Chancellor Angela Merkel for embracing the project. Noting that Germany is a member of the NATO alliance, created to stave off Russian aggression, Trump said, “We have to talk about the billions and billions of dollars that’s being paid to the country we’re supposed to be protecting you against.”

Congressional opponents of the pipeline warn that it would only benefit the Russians, not our Western allies. Senator Jeanne Shaheen (D-NH) notes:

“This pipeline has the tremendous potential to compromise energy security throughout the continent for decades.”

A top aide to a senator who opposes the Nord Stream 2 project remarked that Paul’s letter to his colleagues on why he doesn’t want to see sanctions imposed was filled with errors and flawed logic:

“The letter is very shouty and very wrong,” said the aide, who was not authorized to speak on the record. “It misspells a bunch of things repeatedly, including Nord Stream. It says the bill is economic warfare but it’s against two companies. It says no one knows who’s getting targeted, then it complains about targeting those two companies. It says Europe supports Nord Stream, but everyone except Germany opposes it.”

For now, the sanctions package is on hold in the Senate. And Senator Paul’s strange support of a Russian pipeline has left many of his colleagues scratching their heads.