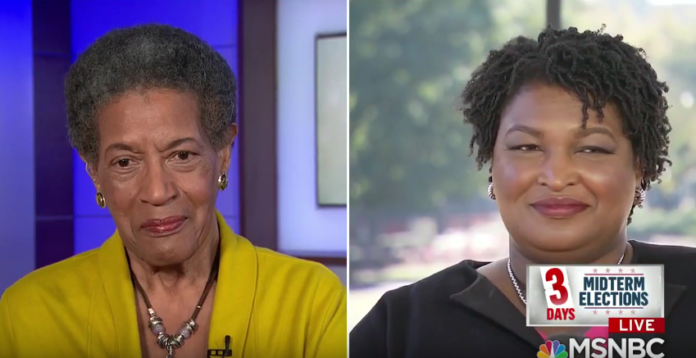 Democratic gubernatorial candidate Stacey Abrams is currently locked in a close race against Republican Brian Kemp in Georgia. But as the GOP tries to suppress the vote for their guy, Abrams just got a major endorsement from the widow of civil rights icon Medgar Evers.

Oprah Winfrey may be knocking on doors and delivering speeches in support of Abrams, but Myrlie Evers-Williams is a legend whose endorsement means a lot more.

Her late husband, Medgar Evers, was tragically assassinated in 1963 in front of their home in Mississippi. She would go on to become the chair of the NAACP, and witnessed the passing of the Civil Rights Act of 1964 and the Voting Rights Act of 1965 into law.

53 years later, Evers-Williams is getting involved as civil rights and voting rights continue to be assaulted by President Donald Trump and the Republican Party.

During an appearance on MSNBC on Saturday morning, she strongly endorsed Abrams for governor.

“I can say without question that this election means everything to the United States of America, to all of the people who reside here, and certainly to people of color,” Evers-Williams said. “I’m absolutely delighted to be able to be on your show once again and to endorse fully — completely — Stacey Abrams to be the next governor.”

Abrams, clearly honored by the endorsement, thanked Evers-Williams for her support.

“There is no higher honor than to have Myrlie Evers endorse my race for governor of Georgia,” she replied. “I want to say thank you to Mrs. Evers for all you’ve done, not only for Mississippi, but for all America.”

Evers-Williams made sure to let Abrams know that she is willing to do whatever she can to help Abrams win and wake America up to stop Republicans from taking the country back to the Jim Crow era.

“My heart is there, my soul is there, my prayers are there,” she said. “Just know that. And whatever I can do to help, whatever I can do to help America wake up and see where it’s going, and to say, ‘no more, no more.’ In the words of my grandmother, ‘enough is enough,’ and too much stinks. And we have to do something about that stink and we can do that at the polls. Thank you for placing your life, your livelihood, and everything on the line. We’re there for you.”

Abrams has a chance to turn Georgia blue, which would be a strong rejection of Republicans and Trump. But she won’t be able to do it without help from Georgia voters. And with Republicans trying every tactic they can to suppress voters, she is going to need every last person in the state to go to the polls for her. Abrams has proven herself to be a strong candidate who cares about the safety and rights of Americans. Republicans are only offering more subservience to Trump as he seeks to destroy our democracy piece by piece. Electing Abrams would go a long way toward stopping the assault.