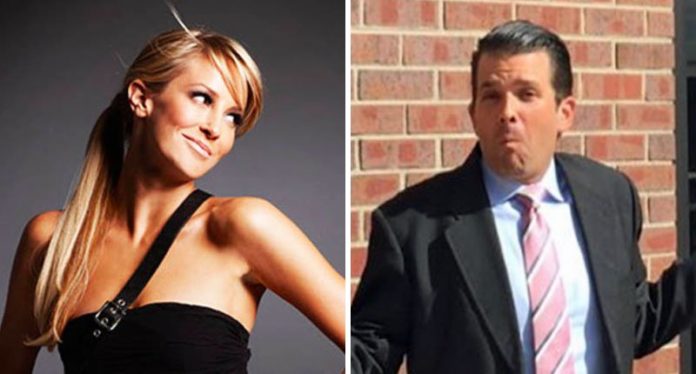 Louise Linton, the wife of Treasury Secretary Steve Mnuchin, says she feels “uncomfortable around the president’s son, Donald Trump Jr., but it’s not for the reason you’d expect.

In an interview she gave to LA Magazine, Linton was asked by writer Maer Roshan:

“Donald Trump Jr. is not in the administration. He’s a big advocate of big-game hunting—lions and elephants. Do you feel uncomfortable going to dinner with him?”

After an extended pause, Linton finally responded to the question:

“Look, I do what I can. I was involved in a couple of meetings at the White House, one of them was a Pets for Vets thing. So there I was, sitting in the Roosevelt Room in a suit, with all these other animal advocates, and my husband walks past and he does a double take, like, ‘Honey? What are you doing in the Roosevelt Room?’ (Laughs.) I’m like, ‘Hi Steve. I’m just here being a voice for the animals!'”

It has been widely reported that Don Jr. and his brother, Eric, are indeed fond of shooting defenseless animals when they go on safari. Junior has even bragged about it on Twitter:

I AM A HUNTER I don’t hide from that “@Fashion_life01: Jr what do you think of the controversy surrounding a pic where ure shown hunting?

Linton is also a proud advocate for LGBT rights, which led Roshan to inquire how she could rub elbows with members of an administration that is so blatantly anti-gay. She replied:

“I very much respect my husband and the president of the United States, but I am an individual with my own beliefs and views. You should measure me by my actions, the friends I keep and the charities I support, not by the politics of my husband.”

“There is a vast distinction between perception and reality when it comes to them. The reality is that they are a dedicated married couple. Ivanka is like a movie star. She is so unbelievably charismatic, beautiful, intelligent, and strong. And Jared is incredibly kind, polite, and kind. I see them with their children when we’re hanging out and having a glass of wine and dinner. But I see them as people, not politicians. Why is it that we perceive people who are in politics as caricatures?”

Maybe if political figures like the Trumps didn’t behave in ways that makes them easy to caricature, they wouldn’t be perceived as such.