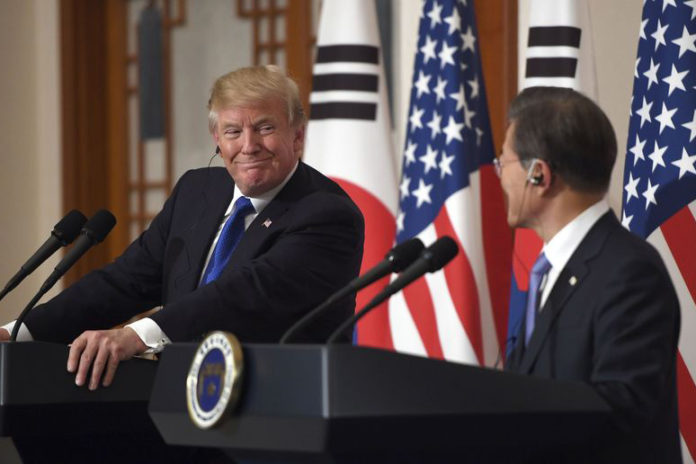 Donald Trump has suddenly altered his stance on negotiations with North Korea.

The president, who is currently in South Korea on his tour through Asia, said he wanted to “make a deal” with the Kim Jong Un regime. This is quite the turnaround from the inflammatory statements we’ve heard from Trump in the recent past regarding North Korea’s leader.

“I really believe that it makes sense for North Korea to come to the table and to make a deal that’s good for the people of North Korea and the people of the world. I do see certain movement, yes. But let’s see what happens.” – Donald Trump

Well, at least now we know that Rex Tillerson wasn’t joking when he said that he would pursue diplomacy until the “first bomb drops.” If Trump can keep his act together, there may be an opening to negotiate, according to The Washington Post.

“If he means it, there may be an opening, because his State Department has been working on a new initiative to break the diplomatic stalemate with Pyongyang, starting with a proposed 60-day freeze in nuclear and missile tests.” – Josh Rogin for The Washington Post

Apparently, the frequency at which North Korea conducts its nuclear and missile tests functions as a signal through which the United States may be able to establish a diplomatic channel with North Korea’s leadership. If the regime hasn’t conducted any tests for a span of 60 days, that is effectively an opening to reach out. This is according to off-the-record comments made by Tillerson’s top North Korea official, Joseph Yun.

In other words, Donald Trump is an idiot. Because if he had any idea what he was doing, he would have been waiting for the right moment to pursue diplomacy instead of threatening Kim Jong Un on Twitter. I guess that’s what happens when a man with no integrity gets into the White House. All of our “foreign relations” become about the weapons trade and how much of our artillery we can move by justifying an unnecessary war.

Tillerson and Yun have reportedly been enlisting support from others. Yun met with top officials in Moscow in September to discuss North Korea. He keeps in touch with the North Korean government.

Both China and Russia have made the very logical argument that the U.S. and South Korea need to stop joint military exercises as a sign of good faith to North Korea, which will respond provocatively whenever the nation feels threatened.

“The best signal that North Korea could give us that they’re prepared to talk would be to stop these missile launches. We’ve not had an extended period of time where they have not taken some type of provocative action by launching ballistic missiles. So I think that would be the first and strongest signal they could send us is just stop, stop these missile launches.” – Tillerson to reporters in August

Right. And while you’re waiting around, get Donald Trump off of Twitter.