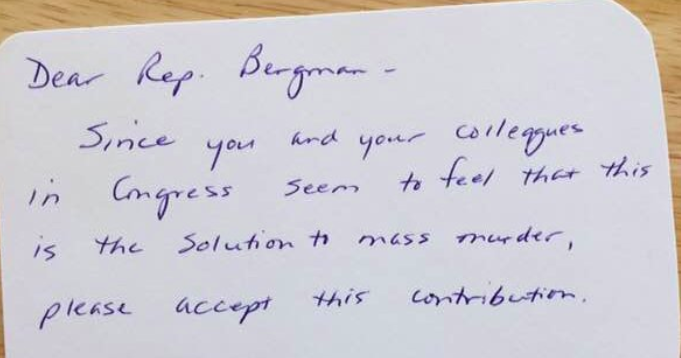 A Michigan woman had a clever response to Republican “thoughts and prayers” in the wake of the Parkland school shooting in Florida this week, where Nickolas Cruz killed 14 students, a teacher, and two staff members at the high school.

The tragedy renewed calls for gun control measures to help prevent future acts of gun violence. But those calls fell on deaf ears inside the Republican Party.

In the aftermath, all Republicans offered are “thoughts and prayers” in place of taking tangible action, including Rep. Jack Bergman (R-Mich.), who sent condolences via Twitter just as other Republicans did.

As a father and grandfather, the tragic news out of Florida is incomprehensible.

Our hearts are with Marjory Stoneman Douglas High School, and all students, victims, families, and first responders in South Florida.

But Bergman’s tweet and the “thoughts and prayers” messages of his GOP colleagues angered Fern Malila enough to send a check to Bergman.

However, it wasn’t the kind of contribution he was probably hoping for.

Malila wrote a check for “thoughts and prayers” and mailed it to Bergman with a letter.

“Dear Rep. Bergman: Since you and your colleagues in Congress seem to feel that this is the solution to mass murder, please accept this contribution.”

Here’s the image via Twitter since it appears Malila has removed the image on her page or changed her privacy settings.

An American with a conscience mailed her Republican Congressman a check for “thoughts and prayers” today 👏👏👏 pic.twitter.com/JimnciLdnV

When contacted by Newsweek about the check, Malila she:

“…Did it because I’m hearing the same arguments after each and every time this happens. Each and every news media person says to contact your congressman, and Congress doesn’t do anything.”

Indeed, Republicans offer “thoughts and prayers” and nothing of substance to actually solve the problem after every mass shooting. The NRA generously spends millions of dollars getting Republicans elected and they are getting their money’s worth every time a shooting occurs.

Rather than expand background checks or ban assault rifles, Republicans say that it’s too soon to talk about guns and hope the public just forgets about the tragedy. It’s the standard NRA and GOP strategy.

Malila’s check went viral and inspired others to send similar checks to their own Republican senators and representatives. She said of the popularity of her idea that:

“Maybe it’s because people just feel that it’s something they can do and hopefully make some little difference. For whatever reason, it has struck a chord.”

Sadly, the “thoughts and prayers” checks won’t change the way Republicans deal with gun violence. They are in the pocket of the NRA and these tragedies will continue to happen until they are voted out of office. That’s the only real way to put a stop to the killing. We need to oust those who enable it, and that means writing real checks to Democratic candidates and voting for them on Election Day.