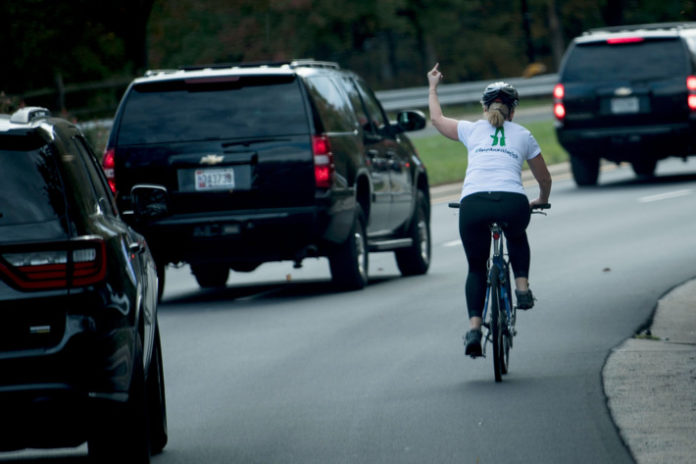 The woman who gave the middle finger to Donald Trump’s motorcade has been fired from her government contracting job, according to The Washington Post.

Juli Briskman was on her cycling path when she threw up her middle finger as the presidential motorcade drove past her in Northern Virginia last month. The photograph of the incident has been seen around the world.

On Halloween, after Briskman gave her bosses at Akima (a government contracting firm) a heads-up that she was the unidentified cyclist in the photo, they took her into a room and fired her. She was escorted out of the building with a box of her things.

“I wasn’t even at work when I did that. But they told me I violated the code-of-conduct policy.”

Briskman’s bosses at Akima have not returned calls and emails from the Post requesting comment. The firm’s social media policy states that “Covered Social Media Activity that contains discriminatory, obscene, malicious, or threatening content, is knowingly false create [sic] a hostile work environment, or similar inappropriate or unlawful conduct will not be tolerated and will be subject to discipline up to

“Covered Social Media Activity that contains discriminatory, obscene, malicious, or threatening content, is knowingly false create [sic] a hostile work environment, or similar inappropriate or unlawful conduct will not be tolerated and will be subject to discipline up to an [sic] including termination of employment.”

Whether that policy applies to Briskman’s circumstances is up for debate.

On the day of the incident, Briskman wasn’t wearing anything connecting her to the company. There is nothing on her social media accounts linking her to the firm. She identifies herself as an Akima employee on her LinkedIn account but makes no mention of the middle-finger photo there.

Briskman was in charge of Akima’s social media presence during her six-month tenure. She recently flagged something that linked her company to behavior far worse than a protest well in-line with her First Amendment rights.

On Facebook, she found a public comment by a senior director at the company “in an otherwise civil discussion” by one of his employees about Black Lives Matter.

“You’re a f—— Libtard a ——,“ the director replied from a profile that clearly and identifies himself as an employee of the firm.

The person to whom the director responded was offended enough to challenge the director for representing Akima in that way. Briskman flagged the exchange to senior management. Did the middle-aged executive who made that comment get fired in accordance with “Section 4.3”?

Yet Briskman, who is the single mother of two teens, was fired for making an impulsive gesture on her day off. Her only mistake was her honesty, according to Bethesda lawyer Bradley Shear.

“You can’t see her face; she is totally unidentified in that picture. But once she identified herself to her employer, they had to consider that information.”

Briskman is not much of an activist. “I think I gave money for clean water once,” she told the Post. During the Women’s March in January, she couldn’t make it to Washington. Instead, she stood in protest outside of the CIA headquarters with a “Not My President” sign.

The day she gave the finger to the presidential motorcade, she hadn’t been planning to make a statement.

Regardless – I think we can all agree that the Trump administration is not only incompetent but malicious. Briskman is entirely within her rights. Her courage to protest a government that so proudly tramples all over human rights is admirable.

Briskman has contacted the ACLU about the case.