The United States Blues
Home Politics Congress Woman who claimed to have evidence of Russian collusion says she turned... 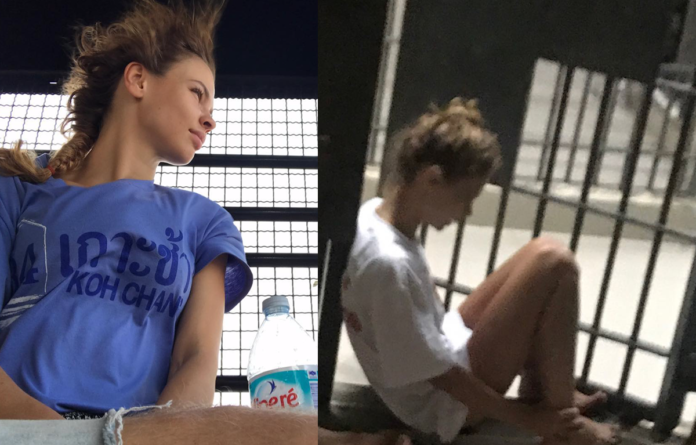 When you are a Russian oligarch, it seems you believe you can act with impunity, and that both Vladimir Putin and the current President and Republican Congress will have your back. But Russian oligarch, Oleg Deripaska appears to have initially underestimated one Belarusian model, Anastasia Vashukevich. She had the stunning audacity to speak truth to power right on her Instagram account. Then she found out what happens when you talk about the rich and powerful, especially when you allege to have tapes to back it up.

Vashukevich, who goes by Nastya Rybka on social media, uploaded a video of Deripaska, the oligarch who Republicans just allowed the Trump administration to relieve by dropping sanctions. She was reportedly having a fling with him aboard his yacht in 2016 when Deripaska spoke to a deputy prime minister and long-time aide to Vladimir Putin, Sergei Prikhodko. The conversation was clearly about relations with America.

A caption said the two men were trying to “solve the issue with America.”

The timing was in August 2016, a month after Paul Manafort offered “private briefings” to Deripaska about our presidential elections. Manafort got a loan of millions from Deripaska before becoming Trump’s campaign chairman in 2016. Recently, we’ve learned that Manafort delivered internal polling data to another oligarch, Konstantin Kilimnik. Now, why do you ‘spose he would do something like that?

“Mr. Deripaska hired Mr. Manafort on a $10 million annual contract in 2006 after the Washington insider proposed a campaign to ‘greatly benefit the Putin government’ by influencing US politics and media, Associated Press reported last year.”

“The oligarch denied this and filed a defamation suit that was thrown out by a judge in October.”

“He sued Mr. Manafort in January for allegedly defrauding him of $18.9 million.”

Eventually, the Instagram video made its way to the Russian opposition leader, Alexei Navalny, who was blocked from challenging Putin in the Russian presidential election. Navalny shared the video in an online investigation. That’s when all hell broke loose for the Belarusian model. While she was leading a “sex training seminar” in Thailand, she was arrested and thrown in prison under the pretext of prostitution charges.

Deripaska apparently wielded his power as an oligarch who felt his “privacy” had been violated. How dare this young woman even think about releasing that video? He sued her and, of course, he won.

“Mr. Deripaska successfully sued Ms. Vashukevich for violating his right to privacy with her photographs and recordings. A Russian court ordered her to delete the posts and pay him £5,800 in emotional damages.”

While imprisoned in Thailand, Vashukevich threated to reveal more evidence; only it was much bigger and worse. She claimed to have proof of Kremlin interference in Donald Trump’s election. She claimed to have seen Americans involved with the plot, and she claimed to have everything on tape. There were at least three unnamed Americans, she said. What’s more, she was willing to turn it over to America if they would only help her. Then she suddenly withdrew her offer.

According to the AP:

“Vashukevich indicated she would turn over the recordings she claimed to have if the U.S. could help secure her release, but later withdrew the offer, suggesting that she and Deripaska had reached an agreement.”

During her time in the Thai prison, she now says the FBI approached her for cooperation, but it may have been too late. She had another deal from the Russians, one she couldn’t say no to.

“She said he received multiple visits from Americans with FBI IDs who were seeking information about her claims of Russian interference in the 2016 U.S. election. She said they offered her safety in the U.S. or threatened her with a lengthy prison term if she refused to cooperate.”

She was abruptly deported back to Belarus, but on the way, she was conveniently detained in Moscow and made to squirm. In transit through Moscow, she was arrested on “suspicion of enticement into prostitution,” carrying a possible punishment of up to six years in prison.

“In the recording, one man says everyone in Vashukevich’s group needs to be ‘locked up’ and suggested that she could be charged with illegal business activities.”

Vashukevich must have realized her only option to save her life at that point was to completely surrender and submit to Oleg Deripaska. In court, she looked fearful, pleading to the Russian oligarch for her life.

“Please forgive me. I was just a tool and people used me.”

While in a Russian jail, she told CNN that Russian security services warned her.

“I had some talk when I was in Russian jail,” she said. “And they explained to me very clear(ly) what should I do, what should I say and what I shouldn’t say.”

“Asked who explained that to her, Vashukevich said ‘Russian agents,’ adding, ‘They said to me, ‘Don’t touch Oleg Deripaska anymore.'”

Today, Talking Points Memo reported that Vashukevich turned over all of her evidence to the oligarchs. All 16 hours of it.

“Anastasia Vashukevich has claimed she had 16 hours of audio and video of Deripaska, who is close to President Vladimir Putin, talking about interference in the U.S. election. She has also posted videos of Deripaska discussing U.S.-Russia ties with a senior government official.”

Her supposed reason: The evidence “relates to him” and she “did not want any more trouble.” She now says she made it all up to get media attention, as a desperate bid to get out of the prison she called “hell.”

“Oleg (Deripaska) has it all. If he wants to make any of it public, if he thinks that it’s a good idea, he can do it himself,” she said.

Can we blame this young woman for turning over the evidence? Absolutely not. What would any one of us do under similar circumstances? Now, we may never know what the evidence showed. Maybe the evidence wouldn’t have lived up to the hype, after all.

What we do know from her prior evidence is the following:

“One video posted on her YouTube account showed a meeting between Deripaska and Adam Waldman, a U.S. lobbyist who has been working for Deripaska and who has had repeated meetings with WikiLeaks founder Julian Assange. The reported January 2017 meeting was several days before Waldman’s visit to Assange at the Ecuadorian Embassy in London.”

So you see, we already have connections from WikiLeaks to Assange, to a U.S. lobbyist, to the Russian oligarch, to Trump’s former campaign manager, to many of the Republicans in Congress. We can surmise, that’s just the tip of an iceberg.

As Trump and fellow Republicans say “No collusion,” it has never sounded so vacuous and delusional. We’re guessing Robert Mueller is following all the collusion and conspiratorial leads. Let’s hope he’ll also get to the bottom of why the Republican Congress seems to be just as afraid of Oleg Deripaska as Anastasia Vashukevich.