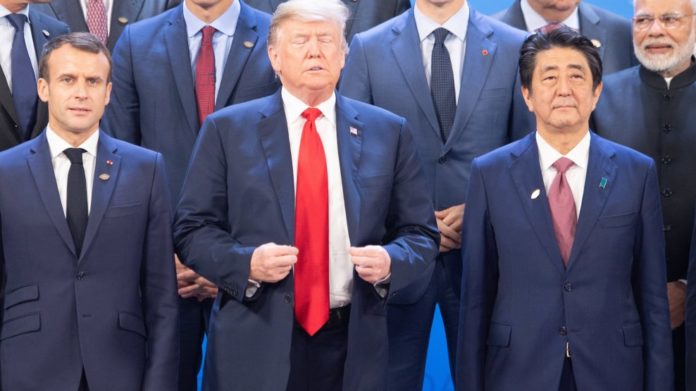 Despite all of his bragging and bluster, President Donald Trump has accomplished virtually nothing in the two and a half years since he took office, and his lack of ability to reach any kind of deal at home or abroad has many world leaders betting that Trump won’t be re-elected in 2020, according to The Washington Post:

President Trump’s brinkmanship with Mexico over immigration has opened a new and risky front in his global campaign to pressure other nations to capitulate to his demands, a strategy that has paid few dividends over 2½ years and left his major foreign policy initiatives in doubt.

From his “fire and fury” rhetoric against a nuclear-armed North Korea to an escalating trade war with China to new ultimatums aimed at Mexico, Trump has wielded threats, insults and punishments against his foreign counterparts with diminishing returns.

Think about it: Trump is over halfway through his term and has yet to reach a single trade deal, has not been able to build his long-promised wall, and has zero foreign policy victories. His repeated failures are now causing leaders across the globe to push away from him in the belief that his days in office are numbered:

“I know that Trump considers the 2020 campaign as a triumphant march to the inevitable [reelection], but that’s not the way the rest of the world is looking at it,” said Christopher R. Hill, who served as a U.S. ambassador under the four presidents who preceded Trump. “You’re already seeing the Chinese holding back and saying, ‘We’ll see what will happen over the next 18 months to see if he’s still around and then maybe we’ll do something.’ To some extent, Trump does not have the self-awareness to understand that people are looking at the window closing on him.”

Just this week, the president threatened to impose trade tariffs on Mexico if the Mexican government doesn’t put an end to immigrants seeking to enter the United States from the U.S.-Mexico border. The move sent the stock market into a tailspin and left many wondering why Trump would be so eager to open a new front in the trade war that has already proven to be a disaster:

“What’s so striking with him is his willingness to pick multiple fights without thinking through the consequences,” said Eliot Cohen, a former State Department adviser in the George W. Bush administration who organized a “Never Trump” coalition of foreign policy experts during the 2016 campaign. “The Mexico thing is a great example. It could really hurt him domestically.”

Trump often says he’s the master of the deal. But so far, those have proven to be nothing more than empty words. His repeated failures could doom him come 2020.