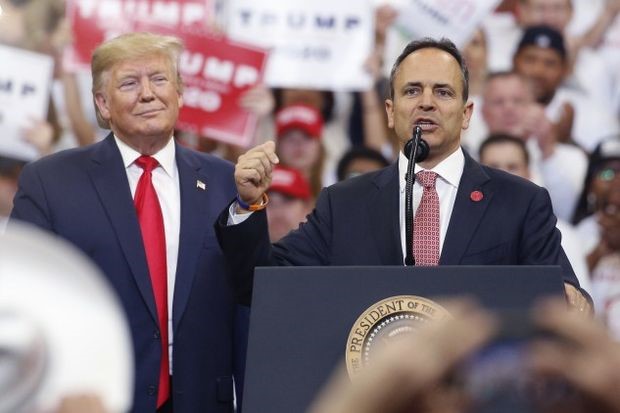 The stunning victories by Democrats in Kentucky, Pennsylvania, and Virginia on Tuesday have many Republicans worried as the 2020 election is now less than a year away and public impeachment hearings are set to begin next week, potentially exposing criminal behavior by President Donald Trump, according to a new report from The Hill:

Senate Republicans are warning that this week’s Democratic victories in Kentucky, Virginia and Pennsylvania should serve as a “wake-up call” for President Trump and the rest of the GOP heading into 2020.

While some Republican lawmakers have tried to minimize Tuesday’s election results, chalking the apparent loss in Kentucky’s gubernatorial race to the unpopularity of Matt Bevin, the GOP incumbent, others say it’s time for a course correction.

At stake in 2020: Control of the House and Senate, along with the White House at a time when Trump is increasingly unpopular and under investigation on multiple fronts.

Senator Lindsey Graham (R-SC), one of Trump’s staunchest defenders in the Senate, said he thinks the president needs to tone down some of his caustic rhetoric in order to appeal to women and voters in swing districts the GOP will need in the next election:

“The suburban losses seem to continue in some places. I think when you look into [it], it’s more about tone and style than it is about policy.

“I would urge the Trump campaign to look into the bleeding in the suburbs, absolutely. It’s just a dynamic you can’t ignore is real.”

John Weaver, a GOP strategist and longtime adviser to the late Sen. John McCain (R-AZ) noted that this week’s election results are a harbinger of bad things ahead for Republicans:

However, asking Trump to tone down his often hateful attacks on anyone who dares to disagree with him won’t be easy. Also, as impeachment continues to heat up, new evidence may send his and the GOP’s poll numbers plunging at a critical time for Republicans.