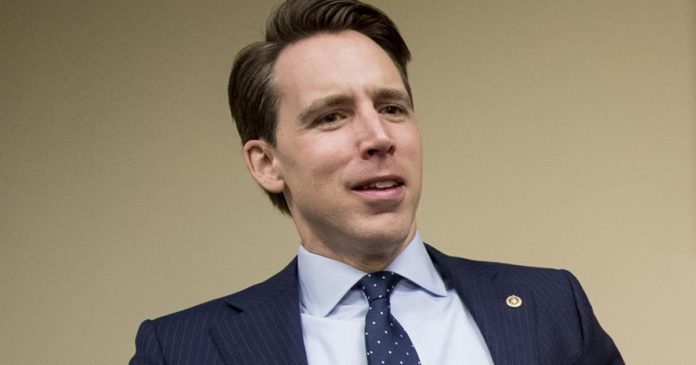 Freshman Senator Josh Hawley (R-MO) must have been so excited as he finished speaking for the first time at the annual CPAC conference on Friday. But his joy soon turned to disappointment when he was served with a subpoena as he stepped off the stage.

According to the Kansas City Star:

“Elad Gross, a Democratic candidate for attorney general who is suing Missouri Gov. Mike Parson’s office, said on Twitter that the Missouri senator was served moments after he completed his appearance.

“Gross is seeking to depose Hawley about his handling of the Missouri Sunshine Law as the state’s attorney general leading up to his 2018 Senate election.”

Hawley had been trying to evade the subpoena and trying to avoid being served, the Star hinted, but the process server knew exactly where he needed to be and was there to hand the senator a subpoena.

As part of his CPAC performance, Hawley engaged in a bit of right-wing conspiracy theorizing, asserting that the Telecommunications Decency Act is an undue burden on conservative political speech.

Kelli Ford, a spokesperson for Senator Hawley alleged that Gross was merely trying to engage in a political stunt for attention:

“This is another political stunt by a political candidate. The reality is that Mr. Gross has been evading a court date to discuss the matter.”

Maybe, but a judge obviously though Gross’ argument was solid enough to issue the subpoena against Hawley.

Hawley, who beat Democrat Claire McCaskill, joined 20 other GOP-led states in filing a lawsuit challenging the Affordable Care Act, also known as Obamacare. Yet when he ran for the Senate, he claimed he wanted to protect the pre-existing conditions mandate of the ACA.

Poor Josh Hawley. He thought he’d big hit with the far right crowd he was speaking to, only to find out that karma crosses all boundaries and catches you when you least expect it.