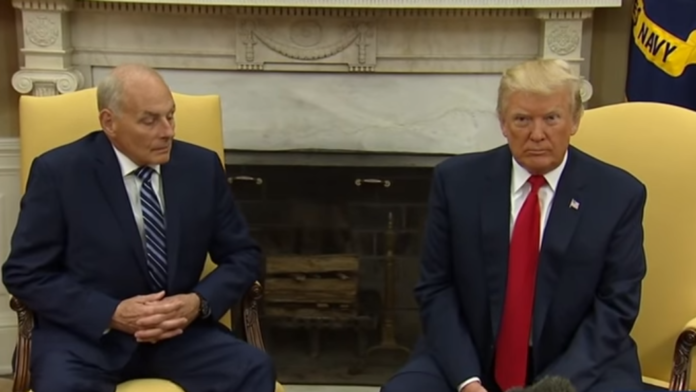 Just minutes after President Donald Trump fired FBI Director James Comey in May of last year, Comey received a call from John Kelly, who at the time was serving as Secretary of Homeland Security in the Trump administration.

Comey now reports, in his upcoming book, A Higher Loyalty, that Kelly sounded emotional during the phone call, saying he was “sick” about Comey’s dismissal and as a sign of protest, he “intended to quit” because “he didn’t want to work for dishonorable people” such as Trump.

As the Daily Beast notes, these recollections of what Kelly told Comey regarding Trump back in May could set off new conflict between the chief of staff and president:

“The revelations conveyed by Comey threaten to cause a firestorm within the White House, further complicating an already tenuous relationship between Kelly and Trump. The chief of staff has been on increasingly-thin ice with the president in recent weeks, largely dating back to his disastrous handling of the resignation of Rob Porter, a former White House official accused of beating his ex-wives. Kelly reportedly told Trump in February that he would resign if asked. And Trump has let it be known to numerous aides and confidants that he feels comfortable operating around (and even without) his chief of staff.”

Another White House staffer said the call between Kelly and Comey was not at all the way Comey reports it:

“A senior White House official disputed Comey’s characterization of the phone call with Kelly, saying that Kelly has maintained that the call was brief—roughly a minute long—and that the gist was, I don’t know why you got fired, [and] best of luck to you,’ according to the official. The version of this story that Kelly has told other senior staffers clashes markedly with Comey’s, the official noted, and does not include Kelly calling President Trump ‘dishonorable.'”

GOP officials are said to be fearful of what controversial revelations could be contained in A Higher Loyalty and have already begun trying to discredit Comey, with RNC spokesman Michael Ahrens commenting:

“What’s dishonorable is that James Comey lied about leaking information to the media, consistently contradicted himself in testimony, and made a series of bizarre decisions as FBI director. That’s why Republicans and Democrats alike have said he has no credibility.”

A Higher Loyalty will be released on Tuesday, April 17.