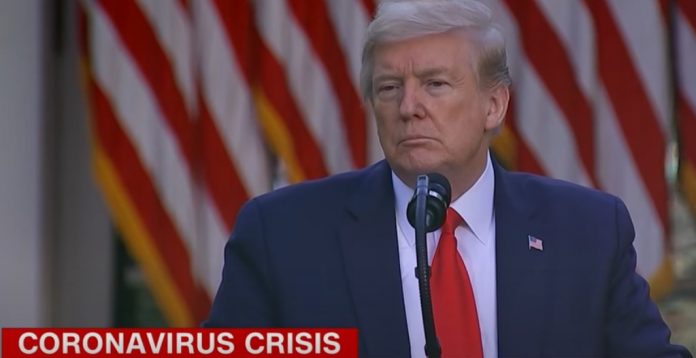 On April 23, 2020, in the midst of a pandemic sweeping across the country, Donald Trump addressed the nation and broached the subject of injecting or consuming disinfectants being tested as treatments. To be very clear, he never said “bleach” or “Lysol” but in the background was a board showing tests on alcohol and bleach.

This photo is incredible. You can see the idea percolating in his mind. “Why has no one thought of this. The answer is right in front of us. I will say it. I’ll be the hero we need.” pic.twitter.com/4abr6rep5L

He also never suggested anyone drink it, just expounded on how efficiently disinfectants kill the virus and then mused about them as cures by injecting them into the body, or putting them in the lungs. Then asked his own scientists, on camera, to confirm they would be testing it as an internal treatment.

An authority figure — one who is arguably worshipped enough for his followers to die by taking fish tank chemicals after he talked about them as potential cures — spoke about these disinfectants as yet more possible potential treatments for COVID-19.

Here is the original statement, starting at around 00:35:

Trump asks if he can inject people with disinfectant to get rid of coronavirus. pic.twitter.com/UQEiNwPYrh

The outcry was immediate. If you were one of those that heard the rambling, confused speech pushing the efficacy of putting lights in the body, or using disinfectants in the body, your jaw likely hit the floor.

The Trump Response was also on par for his usual disjointed, hubris-laden, untruthful style. He claimed that the comment was “sarcasm” to see how reporters responded.

After Controversy, President Trump Claims His Comments On Injecting Disinfectants Were ‘Sarcastic’

That’s worse, arguably, than a misstatement or having been misunderstood. At that time, 51,061 people in the U.S. had died of COVID-19. If he was being sarcastic to see what would happen, that’s a dereliction of his presidential duties at the very least, and depraved indifference at best.

However, in the same press conference, he then doubled down on what he actually said. He really was talking about “hard surface disinfectants” like hand sanitizer and bleach. At least, if you listen to what he said, he did:

“So I said, how do we do it inside the body or even outside the body with the hands and disinfect, I think would work. .. Maybe there’s something there.” pic.twitter.com/UsmOqiaxzt

According to CNN, Maryland, Illinois, Michigan, New York, and Tennessee all reported “an uptick in poison control calls” following the president’s antics. When asked by a reporter if he took responsibility for those calls after his comments, his answer was:

When asked if he would take any responsibility for any people who may die acting on his questions (about injecting or ingesting disinfectants), his answer was again:

Trump seems to be playing his usual hand, having fielded several excuses for his actions, some conflicting, he simply rejects responsibility.