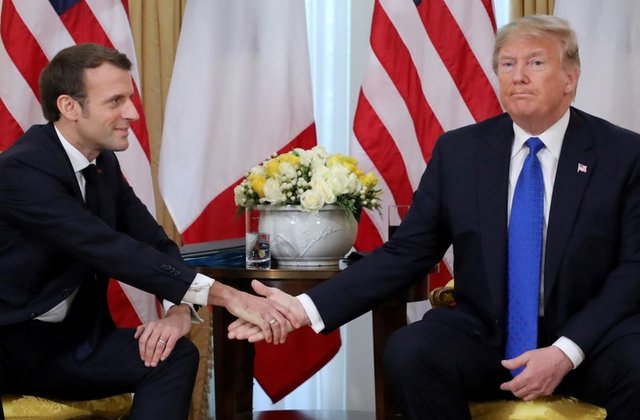 On Tuesday morning, during a press conference with French President Emanuel Macron, President Donald Trump snidely tried to suggest that France should take custody of some of the ISIS fighters captured in Syria, remarking:

“We have a tremendous amount of captured fighters, ISIS fighters over in Syria, and they’re all under lock and key, but many are from France, many are from Germany, the UK. They’re mostly from Europe … would you like some nice ISIS fighters? I can give them to you. You can take every one you want.”

But Trump wasn’t prepared for Macron’s response, and the look on his face proves that the American president clearly knew he had just been publicly humiliated by his French counterpart.

“Let’s be serious. The very last numbers of fighters on the ground are the fighters coming from Syria, from Iraq. It is true that you have foreign fighters coming from Europe, but this is a tiny minority of the overall problem we have … second, some of the foreign fighters are being in Iraq because of the — we have a humanitarian approach for children. very organized. and we’ll have a case-by-case approach.”

The French leader then schooled Trump on how short-sighted his abrupt withdrawal of U.S forces from Syria had been, adding:

“But we need to finish war against ISIS and don’t make any mistakes. The number one problem are not the foreign fighters. This is the ISIS fighters in the regiment and you have more and more of these fighters due to the situation today.”

Red in the face and clearly angered, Trump finally managed to blurt out:

“This is why he’s a great politician. That was one of the greatest non-answers I’ve ever heard. And that’s okay.”

Non-answer? Isn’t Donald Trump the king of not answering questions? For him to accuse someone else of that proves that he knows Macron made him look like the utter and complete fool he is and always will be.

Trump to Macron: “Would you like some nice ISIS fighters? I could give them to you. You could take every one you want.” pic.twitter.com/fcZFe55BCi