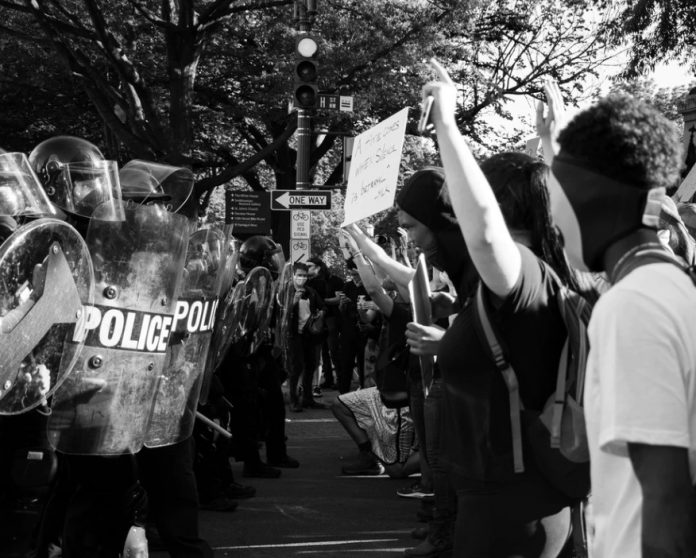 Let me start here: I am a white woman. I have a lot to say about the protests, police brutality, race relations in the U.S., and George Floyd. You won’t, however, find any of that here. Here’s why: there are millions of People of Color (POC), and they can speak for themselves.

Yes, I am an ally, but this isn’t our moment to be heard. It is our moment to use our privilege and voice to amplify their voices, to stand in solidarity, to kneel in protest, and to march for our shared convictions.

How To Be An Ally

“Above all, I urge you keep trying. You’re going to make mistakes; expect this. But keep showing up. Be compassionate. Lead with empathy, always. Keep learning and growing. If you do this, I truly believe you’ll be doing the work of an ally.”

Another thing I read recently is by Shola MRichards, whose viral Facebook post explained why he always walks in his neighborhood with his daughters. It is good reading for anyone who wants to understand why POC are done with quiet, ignorable protests.

Twice a day, I walk my dog Ace around my neighborhood with one, or both, of my girls. I know that doesn’t seem…

“Twice a day, I walk my dog Ace around my neighborhood with one, or both, of my girls. I know that doesn’t seem noteworthy, but here’s something that I must admit:

I would be scared to death to take these walks without my girls and my dog. In fact, in the four years living in my house, I have never taken a walk around my neighborhood alone (and probably never will).

Sure, some of you may read that and think that I’m being melodramatic or that I’m “playing the race card” (I still have no clue what the hell means), but this is my reality.

When I’m walking down the street holding my young daughter’s hand and walking my sweet fluffy dog, I’m just a loving dad and pet owner taking a break from the joylessness of crisis homeschooling.

But without them by my side, almost instantly, I morph into a threat in the eyes of some white folks. Instead of being a loving dad to two little girls, unfortunately, all that some people can see is a 6’2” athletically-built black man in a cloth mask who is walking around in a place where he doesn’t belong (even though, I’m still the same guy who just wants to take a walk through his neighborhood). It’s equal parts exhausting and depressing to feel like I can’t walk around outside alone, for fear of being targeted.

If you’re surprised by this, don’t be. We live in a world where there is a sizable amount of people who actually believe that racism isn’t a thing, and that White Privilege is a made-up fantasy to be politically-correct. Yes, even despite George Floyd, Christian Cooper, Ahmaud Arbery, and Breonna Taylor (and countless other examples before them, and many to come afterward), some people still don’t seem to get it.

1) Having white privilege doesn’t mean that your life isn’t difficult, it simply means that your skin color isn’t one of the things contributing to your life difficulties. Case in point, if it never crossed your mind that you could have the cops called on you (or worse, killed) for simply bird watching then know that is a privilege that many black/brown people (myself included) don’t currently enjoy.

2) Responding to “Black Lives Matter” by saying “All Lives Matter” is insensitive, tone-deaf and dumb. All lives can’t matter until black lives matter.

3) Racism is very real, and please don’t delude yourself into thinking it’s limited to the fringes of the hardcore MAGA crowd. As Amy Cooper proved, it’s just as prevalent in liberal America as it is anywhere else.

4) While racism is real, reverse-racism is not. Please don’t use that term, ever.

5) In order for racism to get better, white allies are absolutely critical. If you’re white and you’ve read this far, hopefully you care enough to be one of those allies. Please continue to speak up (despite some of your friends and family rolling their eyes at you), because your voices matter to PoC now more than ever. Special shoutouts to my friends Becky, Catherine, Dory, Elizabeth, Greta, Jessica, Kayte, Kurt, Peter, Sharri, and Teri (and anyone else who I missed) for doing it so well.

6) And if you’re white, and you’re still choosing to stay silent about this, then I honestly don’t know what to say. If these atrocities won’t get you to speak up, then honestly, what will? Also, it’s worth asking, why be my friend? If you aren’t willing to take a stand against actions that could get me hurt or killed, it’s hard to believe that you ever cared about me in the first place.

As for me, I’ll continue to walk these streets holding my 8 year-old daughter’s hand, in hopes that she’ll continue to keep her daddy safe from harm.

I know that sounds backward, but that’s the world that we’re living in these days.

I Can’t Not Do Anything! What Can We Do?

Don’t get this wrong, speaking up and speaking out about the behavior of white people, police, and race relations in this country is OK. It’s the fact that we lose the message from those most affected by these things in the sea of noise when we all do it at once, which means we need to use our privilege to promote their message — not our own.

There are things you can do, as an American, to support POC while working on change. Some of those things are physical presence. Show up.

Show up to the rally, bring water, eye-wash, and bandages. Show up to vote.

You can also do things like #standinthegap, which is another hashtag right now. This viral post talks about doing just that – it’s one of the things that we can DO which takes nothing from the voices of those we are trying to support.

“I was out for an evening drive tonight when I passed two young black men who were pulled over by a total of 6 police officers. My hands started trembling and all I could think to myself was will they be the next George Floyd? I pulled over at the next apartment complex, parked my car, and walked back down the sidewalk on the opposite side of the street to monitor their interaction and to ensure their safety. I watched these young men be handcuffed and sat down on the curb while officers rummaged through their vehicle for over 10 minutes. Over the course of this time 5 other bystanders joined me in policing the police. Apparantly whatever they were looking for wasn’t there, because they let the young men leave, but not without pointing their fingers and laughing at us bystanders. Its a sad world we are living in when we are forced to take measures like this to #policethepolice , to ensure the safety of our brothers and sisters. As a white man of privilege, this is the only lane I can fit in. This is how I can not only support, but possibly save the life of one of my brothers or sisters. We are the human race before we are anything else. There was no wrongdoing by the police in this interaction, and these officers may be quality professional and compassionate people, but I won’t bet YOUR life on it! I won’t stand by when I can stand up! #BLACKLIVESMATTER ??? #StandInTheGap #GeorgeFloyd #IcantBreathe“

More Things We Can Do To Support People of Color 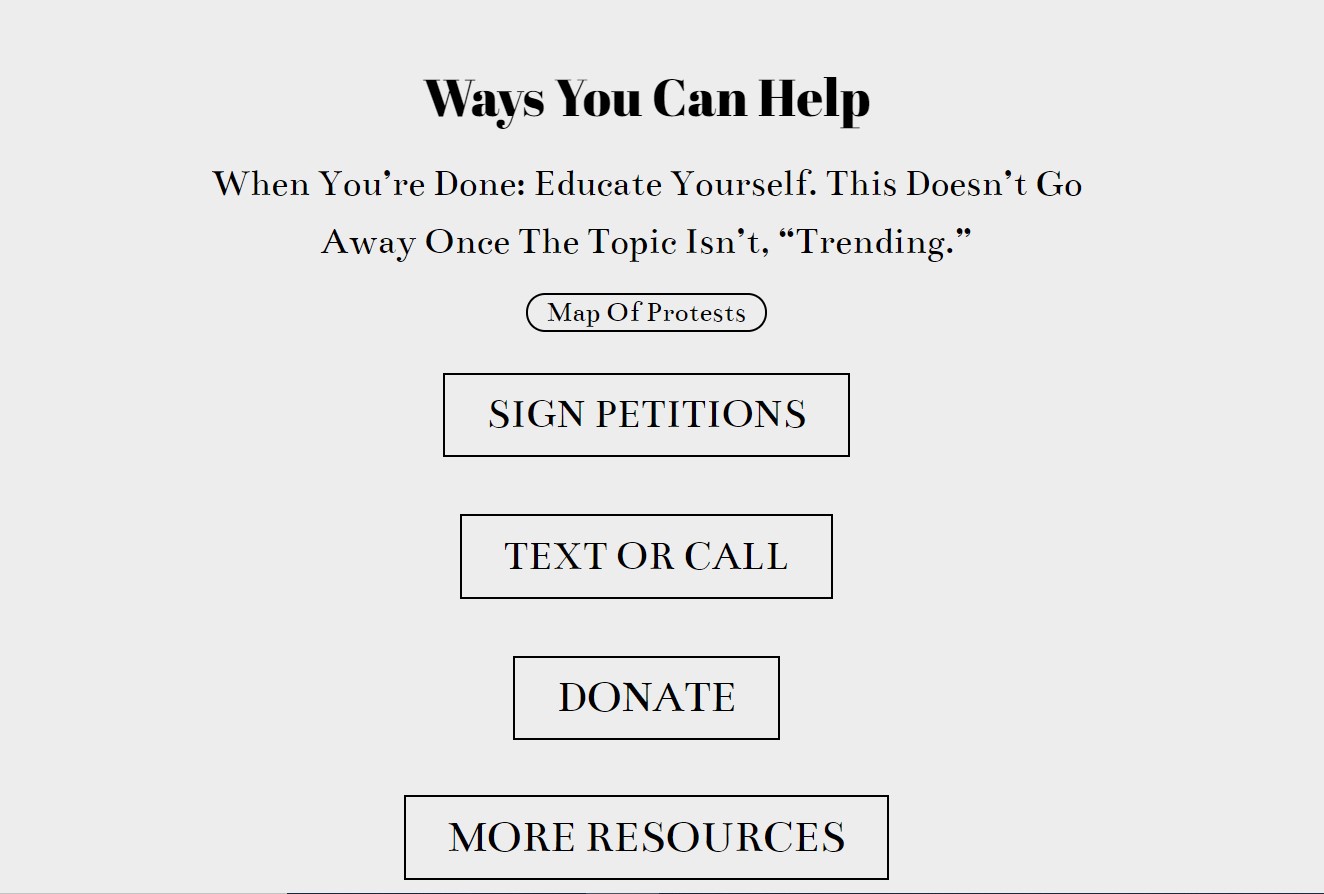 The image above is a screenshot taken from the BlackLivesMatter website, and if you click on it, it will take you there to do the actions listed.

We can help, we can amplify their voices, and we can act.

Just remember, if we are feeling helpless or silenced, it may be time for us to just “sit with” that feeling for a moment. It’s the smallest sliver of what it may feel like to be genuinely marginalized, and likely the closest most of us have ever come to feeling that lack of privilege.