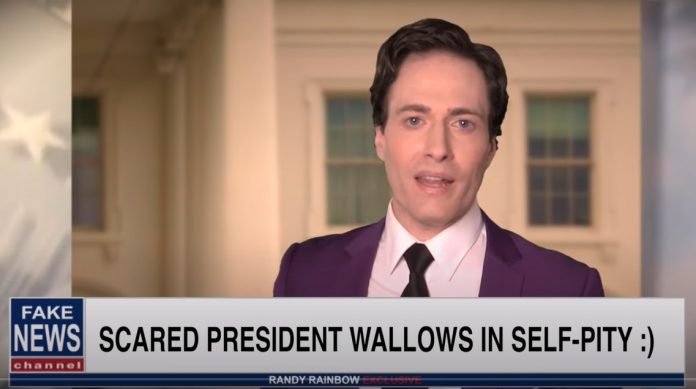 If you are a 90s child, “poor unfortunate soul” is a tune that will never leave your mind, and Ursula singing it is the epitome of truly evil largess. Randy Rainbow, in what has been called his best parody ever, lampooned Trump so honestly with the tune reimagined as “Poor Deplorable Troll,” it’s a joy to watch.

Rainbow’s previous offerings have run the gamut from “Cover Your Freaking Face” to “A Very Stable Genius.” As we are facing unprecedented times, and the current “president” is unpresidential and embarrassingly losing his never-high ratings — a simple song and dance are really all we owe him.

There’s nothing quite like seeing his gag-worthy lack of ability spelled out in well-rendered show-tunes. While we’d have preferred to have Congress get their act together and impeach him righ-outta-office, we’ll take the laughs where we can get them — and at the expense of his ego.

And Randy Rainbow is great at pointing out each and every one.

Randy Rainbow’s smiling face, dulcet voice, and huge personality just do it for us. Hopefully, he’ll have a real winner for November 4th, and we’ll have a new name in the White House.

While this is all fun and games, the facts of the matter are much less funny. Our country suffers under a leader who would rather be popular than good, rather be rich than right, and rather have a great stock market than healthy, well-earning citizens.

As long as we face the fallout of Republicans in office (such as attempting to destroy healthy coverage for hundreds of thousands during a pandemic) we can also enjoy the satirization of their actions; that is as long as the dude in the White House hasn’t succeeded in ripping apart the first amendment yet.

It is a very unfair business when the media keeps telling the truth regardless of how often and hard you lie, just ask Mr. Trump.