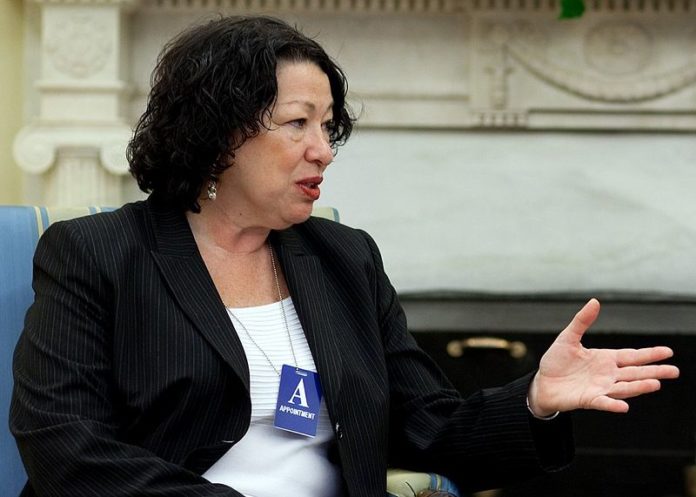 Trump has been desperately trying to end asylum for Central American migrants as part of his anti-immigration agenda to pander to his racist supporters, even though there is a law on the books that specifically grants asylum to any migrant on American soil or at a port of entry.

But Trump toady Attorney General Bill Barr concocted new rules that changed the statute, which was why a district court blocked it from taking effect. Trump then whined to the Supreme Court, which, without taking up the case to make a ruling on the merits, issued a stay reversing the lower court’s decision. That means Trump can deny asylum to any migrant just for passing through Mexico to get to the United States.

Sotomayor slammed the Trump administration in a powerful dissent.

“Once again the Executive Branch has issued a rule that seeks to upend longstanding practices regarding refugees who seek shelter from persecution,” she wrote. “Although this Nation has long kept its doors open to refugees—and although the stakes for asylum seekers could not be higher—the Government implemented its rule without first providing the public notice and inviting the public input generally required by law.”

Sotomayor pointed out that judicial steps were skipped by the administration because rather than wait for rulings by the Ninth Circuit Court of Appeals, Trump went straight to the Supreme Court knowing that he has a conservative majority ready and willing to do his bidding regardless of what the law or the Constitution says.

“First, the court found it probable that the rule was inconsistent with the asylum statute, 94 Stat. 105, as amended, 8 U. S. C. §1158. See §1158(b)(2)(C) (requiring that any regulation like the rule be “consistent” with the statute)m” she said in reference to the District Court ruling. “Section 1158 generally provides that any noncitizen “physically present in the United States or who arrives in the United States . . . may apply for asylum.”

She then noted that the Trump administration changed the rules without public notice and no public commenting period.

“The District Court found that the challengers would likely prevail because the Government skirted typical rulemaking procedures,” she said.

Also, the administration could not even present a good explanation for the new rule.

“The District Court found the explanation for the rule so poorly reasoned that the Government’s action was likely arbitrary and capricious,” Sotomayor continued before concluding:

It is especially concerning, moreover, that the rule the Government promulgated topples decades of settled asylum practices and affects some of the most vulnerable people in the Western Hemisphere.

It’s a sharp rebuke and there will be more like it because the Court just made it more likely that Trump and his cronies will continue flouting judicial procedure and go straight to the high court whenever they don’t get their way in a District Court, especially if they view an Appeals Court as unfriendly to their arguments and agenda.