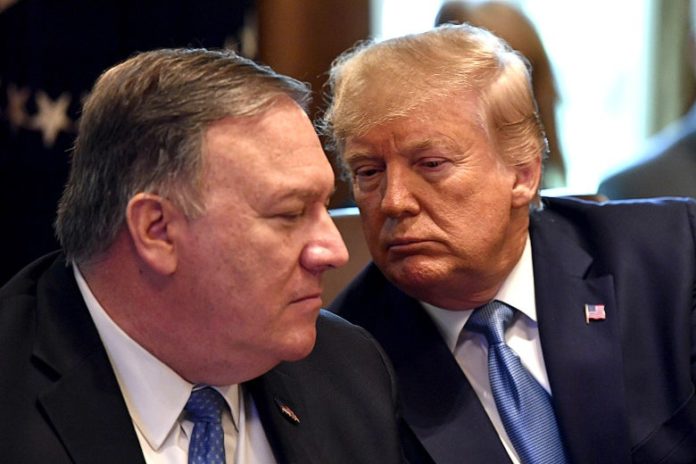 Testimony from top State Department diplomats last week has created a major rift between President Donald Trump and Secretary of State Mike Pompeo, according to a report from NBC News:

Trump has fumed for weeks that Pompeo is responsible for hiring State Department officials whose congressional testimony threatens to bring down his presidency, the officials said. The president confronted Pompeo about the officials — and what he believed was a lackluster effort by the secretary of state to block their testimony — during lunch at the White House on Oct. 29, those familiar with the matter said.

Inside the White House, the view was that Trump “just felt like, ‘rein your people in,’” a senior administration official said.

Specifically, Trump is said to be upset that Pompeo appointed Bill Taylor to be the top diplomat to Ukraine in June.

In damaging testimony before the House impeachment inquiry, Taylor confirmed that Trump had pressured Ukraine to dig up dirt on former Vice President Joe Biden and his son, Hunter, prior to releasing nearly $400 million worth of military aide to the Ukrainians, who are under threat from neighboring Russia.

And that, sources say, has led Trump to blame Pompeo for failing to keep his employees in line and loyal to the president.

For his part, Pompeo is also said to feel squeezed between his loyalty to Trump and managing thousands of employees at Foggy Bottom:

The impeachment inquiry has put Pompeo in what one senior administration official described as an untenable position: trying to manage a bureaucracy of 75,000 people that has soured on his leadership and also please a boss with outsized expectations of loyalty.

“He feels like he’s getting a bunch of blame from the president and the White House for having hired all these people who are turning against Trump,” an official familiar with the dynamic said of Pompeo, “and that it’s the State Department that is going to bring him down, so it’s all Pompeo’s fault.”

Within the State Department itself, Pompeo is said to be despised by the majority of those who work there:

“Pompeo is hated by his building,” a person close to the secretary said, adding that he “feels the heat a great deal and feels it’s personal at state.”